It Could Have Been Worse: The Centennial Bridge Freeway Proposal

As any Quad-Citian who regularly commutes over the Mississippi can tell you, the Centennial Bridge repair project is ongoing, a new construction project has started on the I-74 off ramps in Moline, and the barges keep stalling traffic over the Arsenal Bridge.

But did you know that things could have been much worse?

What if the Centennial had been a highway bridge?

In August of 1964, plans for a 4-lane freeway through town were presented to Davenport City officials:

“We want to relieve the congestion on existing streets and offer people in Davenport, and those driving to it, a good, time-saving, money-saving route”

The freeway would run north from the Centennial Bridge, between Gaines and Brown streets, cross Kimberly road between Brady and Harrison streets, then join Brady just before reaching I-80. Interchanges would have been built at Locust Street near St. Ambrose College, and north of Duck Creek on Harrison Street, with underpasses at 8th and 14th streets.

“The main purpose of the four-lane divided freeway was to provide a more efficient route for traffic bound for various points in Davenport, rather than helping cross-country vehicles through the city.” 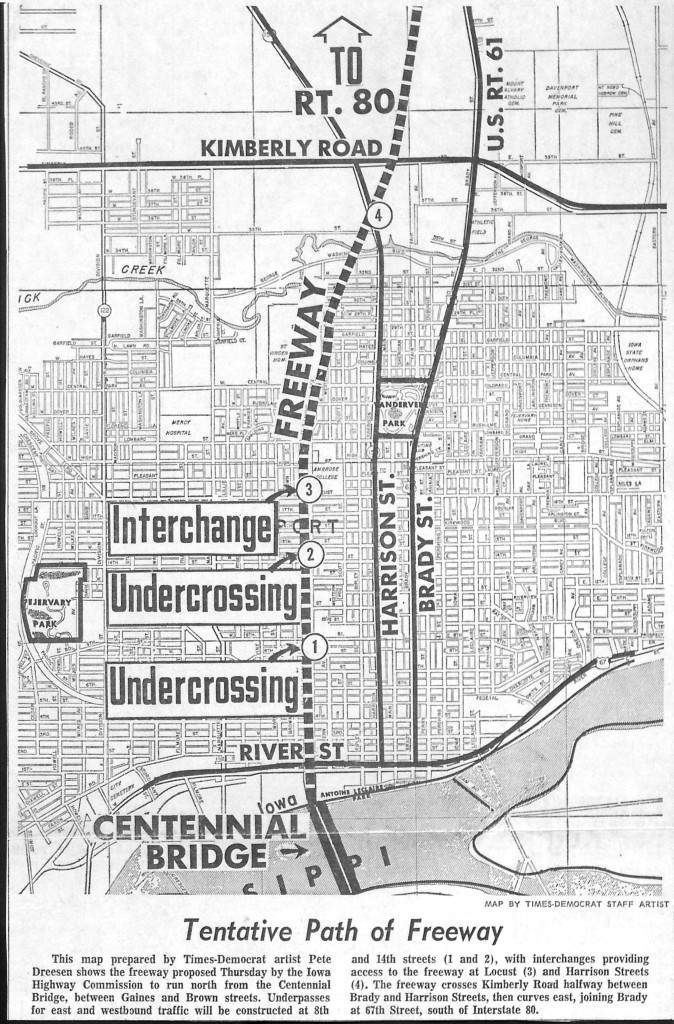 The proposal was discussed and ultimately tabled. But the issue came up again a decade later, though I-280 had opened in Iowa on October 25, 1973 and the I-74 corridor was underway.*

“Transportation studies showed that by 1985, some kind of improvement in traffic capacity must be achieved along these general corridors. “

The plans this time included a north-south freeway with a similar path to the 1964 proposal, plus an east-west central business bypass expressway district, which would have run from East River Drive, through 5th & 6th Street and end at Rockingham Road.

As the Times-Democrat explained, “A freeway is a four-lane divided, limited access highway. An Expressway is a bit more sophisticated form of freeway, with totally controlled access.” (22 Apr 1973)

Some citizens were concerned that the proposed plan would fail to attract people to the downtown, might displace many people from their homes, discourage mass transit use, and have high construction costs.

Other alternatives were to “do nothing” or to widen and improve Brady and Harrison streets.

Doing nothing was not the popular choice:  in July 1970, the Times-Democrat had reported, a record 32 vehicle accidents occurred on Brady Street. Vehicle counts showed that during peak periods more than 25,000 vehicles used portions of Brady Street.

Despite the hassle of construction, street improvements looked like the better option:

—Study released by the Motor Club of Iowa, March 1972

Brady and Harrison streets were turned into four-lane one-ways between River Drive and Lombard Street for a 90-day trial on February 8th, 1973. The trial was made permanent. On May 1st, 1984, the one-ways were extended beyond Lombard and a new three-lane highway was constructed from Brady near 59th Street and connected with Harrison Street south of 37th Street.  The southbound highway was eventually called Welcome Way.

So, when you’re stuck on one of our bridges—or on the way to one—just remember:  it could be worse . . . and it does, eventually, get better!

*This corridor was completed through Moline on December 10, 1975.

Bad Behavior has blocked 819 access attempts in the last 7 days.