On September 26, 1912, at the early hour of 7:30 a.m., Miss Alma De Beaulieu, a bookkeeper for the Fair Store in Davenport and Dr. William C. Vollstedt, a veterinary surgeon, were married at the Holy Cross German Lutheran Church.

According to the wedding announcement, which appeared on page 10 in that day’s evening Davenport Democrat, the church, which then stood at 626 Belle Avenue,* was decorated with yellow and white roses, and green ferns.

Though our photograph of the bride in her finery was probably taken some days before, the newspaper makes it clear that she was just as radiant during the ceremony, despite the early hour: 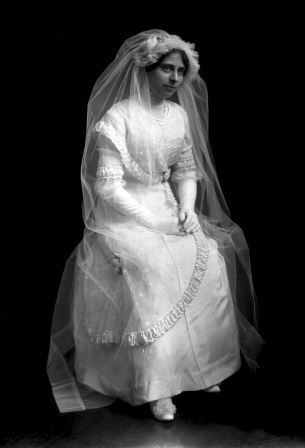 “The bride’s dress was of white crepe de chine made over white silk, and draped in one-sided scarf effect, with princess lace that was edged with shirrings of the crepe. The wedding veil of lace and tulle fell from a wreath of green and white and the bridal bouquet was of bride’s roses and ferns.”

The article doesn’t mention her slippers, but their adorableness was captured by the Hostetler Studio photographer: 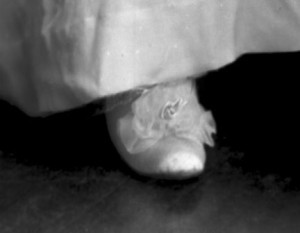 After a wedding breakfast, shared with a dozen guests, the couple left for an extended Chicago honeymoon on the morning train. The bride’s going away outfit, which unfortunately was not captured by the photographer, was a tailored suit of tan with a floral brocaded bodice and a hat of brown velvet.

We’re certain her shoes were lovely as well.

The couple returned in November and took up residence at number 8 Walker Flats, a fashionable apartment complex on the 100 block of West Fifth Street.

* The present day Holy Cross Lutheran Church, at 1705 East Locust, was dedicated in 1927. It may be of interest to note that the church is listed in the 1912 city directory as the “Kreuz Kirche”or, in English, “Cross Church”. Services were offered there in both German and English until 1919. German language church services in Scott County never recovered after being banned during World War One by the governor.  Strong anti-German sentiment remaining after the war might have also influenced the decision to move to English only services.

Bad Behavior has blocked 674 access attempts in the last 7 days.