A “Brilliant Home Function”: the Modest Wedding of James Lane and Sophia Shuler 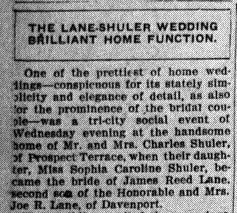 Sophia Caroline Shuler was the daughter of Charles Shuler, the president of the First National Bank of Davenport and the owner of several mines. Miss Shuler was a graduate of St. Katherine’s and the National Park Seminary in Washington, D.C., and was active in the social circles of Davenport.

James Reed Lane was the son of respected lawyer Joe R. Lane, a partner in the respected Davenport law firm of Lane and Waterman* who was also a former congressman. Young Mr. Lane attended Exeter and the University of Iowa, before passing the bar and joining his father’s firm.

It’s no wonder that the Davenport Democrat used one and a half columns to describe, in effusive detail, their wedding, which took place on July 12, 1911, at the Prospect Terrace home of the bride’s parents, 1516 East River Drive. 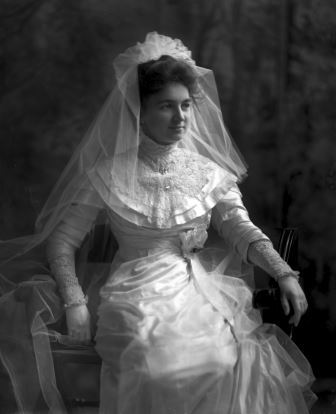 This modest event, which was attended by three hundred guests,**  began at 8 o’clock, as the Criterion Orchestra started playing “The Bridal Chorus” from Lohengrin.

“The wedding ceremony was performed in the wide doorway leading from the hall to the library. Garlands of smilax combined with pink roses entwined the pillars to either side, and formed an arch overhead, while potted ferns and palms made an effective setting for the improvised altar in the doorway . . .” 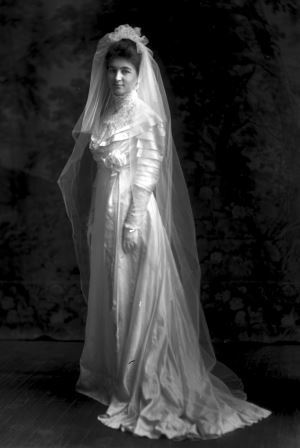 “The bride was dressed in an exquisite creation of chantilly lace, over white satin, made with court train the panel front opening to one side showing the satin underdress. It was made with Dutch neck and short sleeves and the long wedding veil was caught in bando effect with fragrant orange blossoms. The bride’s only ornament was the diamond lavaliere, the gift of the groom, and her flowers with lilies of the valley in a shower bouquet.”

The couple was married by Reverend Robert Donaldson of the Presbyterian Church of Milwaukee,*** after which a reception was held in the library, presumably on some kind of rotation schedule to accommodate all the well-wishers.

Later, there was dinner and dancing on the lawn, on which a pavilion had been built and electric lights in globes had been installed, just for the occasion.

After a lengthy honeymoon trip to the “northern lakes”, the couple took up residence in the new home James Lane built for his bride at 324 Mississippi Avenue in east Davenport.

**It should come as no surprise that the surnames of the attendants and guests read like a Who’s Who of prominent families with local or political ties, notably McClellan, Von Maur, Pease, Norwood, and Ramsey (of the Des Moines Ramseys).

*** Reverend Donaldson’s father was the former pastor of the First Presbyterian Church of Davenport. Dr. Donaldson also read for the service.

Bad Behavior has blocked 837 access attempts in the last 7 days.