When Irish Eyes are reading the newspapers . . .

It’s difficult to do any research about Davenport’s earliest history without finding at least one Germanic surname along the way. And once the “forty-eighters” came here to find a little peace from the ongoing wars in their part of Europe and started naming things and holding festivals, outsiders would be forgiven for thinking that our area was a little transplanted piece of Schleswig-Holstein.

But Germans weren’t the only group to settle here, and if one knows where to look, there’s no denying that there’s quite a bit of Ireland here, as well.

In honor of St Patrick’s Day, we decided to search our Access Newspaper Archive Database to find out how Davenport celebrated this most Irish of holidays over the last 155 years.

In 1859, the celebrations mostly consisted of respectful speeches and toasts.   The one thrown by the Sarsfield Guards at LeClaire Hall, provided music by a men’s chorus and a small band.  Veterans and current members of the military were “respectfully requested” to wear their uniforms. 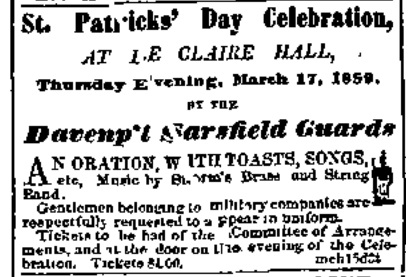 A mass at St. Anthony’s Catholic Church at the corner of Main and Fourth Streets was held, followed by dancing at Lohrman Hall—which was scarcely big enough to hold the hundreds who attended—and a late feast.

In 1922, a parade was reported, but more attention was paid to the fancy dress parties—all the rage in the roaring twenties—held in honor of St. Patrick’s Day by Davenport’s high society.

Mr. and Mrs. McGinnis hosted an “old fashioned social” ball for their friends, who were asked to dress in Civil War era hoop skirts, shawls, and frock coats.

According to the article, some of the fashions were genuine, like the 100-year old, black crepe bonnet and veil worn by Mrs. Theo Zingg. 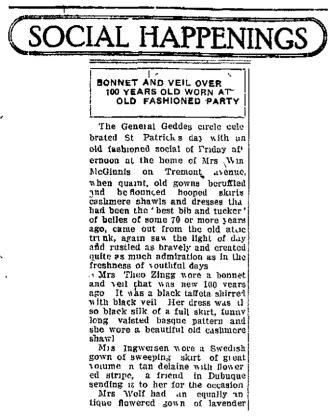 By 1949, the St. Patrick’s Day parade was still being held,  according to the papers, and the after-parties were beginning to resemble the ones held in Davenport last weekend—though the days of sixty-cent cover charges (or, sadly, even $6.00, in 2012 dollars) are long gone. 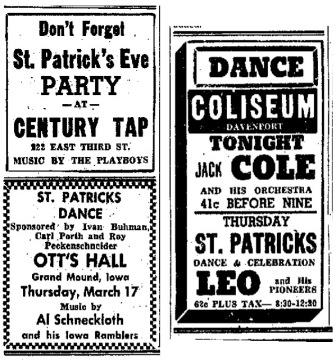 The newspapers doesn’t mention whether green beer was served at any of these past celebrations. . . but even on a day that has and will always belong to the Irish, we highly doubt the Germans would have stood for it!

The Access Newspaper Archive Database is accessible on any of our public workstations at any of our three branches.  The search engine in comprehensive and full scans of historical newspapers throughout the country, some as far back at the 1700s, can be printed or downloaded.  Come on in and check it out!

Bad Behavior has blocked 554 access attempts in the last 7 days.