A Simple Ceremony: The Wedding of Elsa Petersen and Phillip Sonntag

The wedding of Elsa Gertrude Petersen and Phillip Arthur Sonntag was a quiet affair.

The couple was married in the evening of February 22, 1910,  at the home of the bride’s mother.  Only family were invited; in fact, the officiant, Justice Louis E. Roddewig, was the bride’s brother-in-law.   The brother of the bride, George Petersen, provided the only bridal attendants:  his young daughters, Gertrude and Dorothy Petersen.

That didn’t mean, of course, that the Davenport Democrat didn’t write up the event for the next day’s social pages.  Or that the bride and groom skipped the wedding photographs. 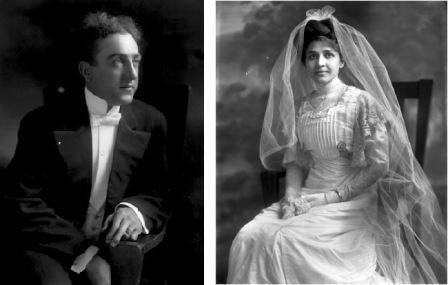 “The bride was in a white satin gown made simply in one piece effect, the folds of the skirt falling away into graceful lines of a long train. The bertha was of old lace, and there were edgings of pearl trimming, the sleeves being of lace.  The bridal veil was held in place with flowers and the bridal bouquet was of fragrant white blossoms.” 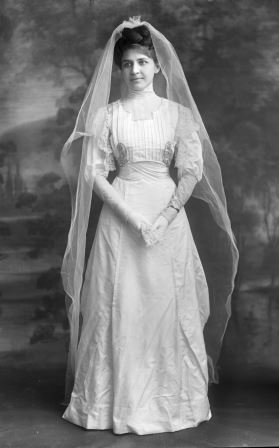 A bertha, for those of you not up on early 20th Century finery, is what the reporter is calling the lace panel from the bride’s chin to her modest décolletage: 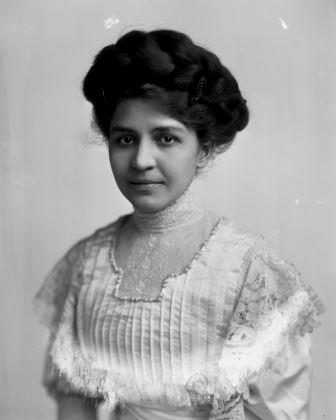 We have no images of the ring bearers in our collections, but the newspaper describes the small Misses Petersen as wearing white dresses with pink sashes and walking together, hand in hand, down the aisle, with the rings on little silk pillows.

As usual, the groom is not described by the newspaper, men’s fashion being somewhat standard issue at these events, but the Hostetler Studio did take several photographs of the dapper young man, who, according to the newspaper, had a remarkably fine singing voice and owned a share in his family’s plumbing business.

He also looks pretty good in a tux: 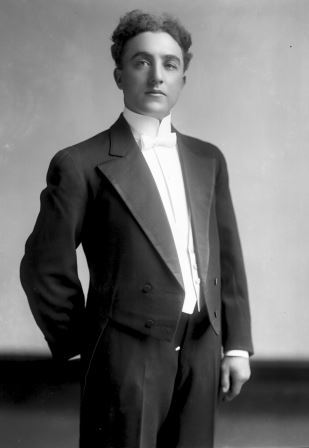 According to the paper, the couple spent three months in California on their honeymoon, and then moved in with the bride’s mother, at 520 West Eighth Street.

The article doesn’t mention the family discussion that preceded that decision . . .

1 Response to A Simple Ceremony: The Wedding of Elsa Petersen and Phillip Sonntag

Bad Behavior has blocked 1116 access attempts in the last 7 days.