On the morning of May 2, 2013, Davenport’s history suffered a sad loss: the historic Credit Island Lodge was severely damaged by fire. 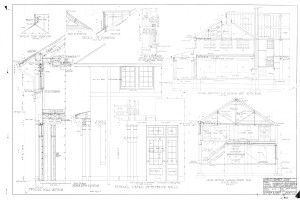 By September 23, 1923 the Davenport Democrat and Leader reported that contractors J. F. Nebergall and Son**  had started work on the building.  It was finished in 1924.

The lodge was originally designed for the golfers enjoying the island’s golf course, and included caretaker accommodations.  The site enjoyed many parties, gatherings, and celebrations over the years as rooms could be rented for events. In 2011 the Lodge’s interior was redone as part of a restoration of Credit Island Park. 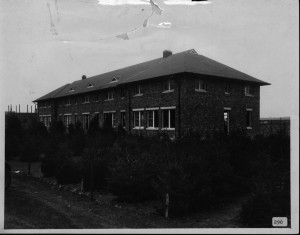 Over the years, the building survived wind, weather, and many Mississippi River floods, which eventually ruined the back nine holes of the nearby golf course.  Ironically, the protective barrier still surrounding the building from the previous month’s flood*** posed a challenge to the firemen’s attempts to save the building.

At this posting, the fire has been provisionally determined to be accidental. The City of Davenport does not know if the lodge will be rebuilt or not. 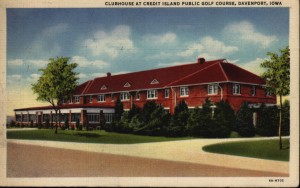 A later view of the Credit Island Lodge

***As Credit Island is closed to all but emergency personnel when the Mississippi floods, we have no flood photographs in our collection from the site.

Bad Behavior has blocked 748 access attempts in the last 7 days.