While adding items to our Ephemera collection, we found brochures for the Quad Cities U.S.A. campaign—and we couldn’t resist sharing!

“A typical Quad-Cities resident lives in one community, works in another and shops in a third city. It’s urban, but also rural; it’s Midwestern, but not small town; it’s sophisticated, but casual; it’s quality within quantity; and most of all, it’s friendly.”

The Quad-Cities U. S. A. promotion campaign began around 1980 when a local radio station wanted to promote our area. The Quad-City Development Group coordinated the program with help from local advertising, public relations agencies and industries.

One of the major purposes of the campaign was to promote unity and identity among the collective residents of the several cities that had merged geographically over the last century.  It was hoped that this sense of interdependent community would help promote the Quad-Cities as a place with the benefits of small town life and the advantages of the big city.

So, what are the “Quad-Cities”?

So why aren’t we called the Tetradeca-Cities?

In the beginning, we were the  Tri-Cities:  Davenport, Rock Island, and Moline.

There are several theories about why “Quad” was added to our name:  Bettendorf finally grew up enough to join the party; a road atlas made a mistake and it stuck; or someone noticed that there were a lot of cities inside the quadrangle created by Interstate-80 and Interstate-280.

But whatever the real reason, as more towns and cities were absorbed, it became clear that it would be extremely inconvenient to upgrade our collective name every few years.

What happened during the campaign?

The Quad-City Development Group brought the creative talents and funds together for the project. Over $500,000 in Public service air time and advertising space went into the campaign as well as many hours of perception research and concept development.

Some of the taglines used in their brochures include:

“…Where The ‘Father of Waters’ meets ‘The Mother Of Invention’”

“…Where Urban Lifestyle And Rural Beauty Sing In Harmony.” 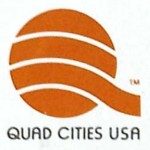 A stylized “Q” to symbolize the union of cities was designed by the Deere & Company visual communications department, and a film mirroring Quad-Cities industry, lifestyle, recreation and agriculture was produced by Forward of Illinois Productions, of Morton.

There was even a song commissioned to convey “the upbeat spirit of our metropolitan life.”  Charlie Teague, of Warren, Anderson, Litzenberger & Teague, Inc., wrote the lyrics and Bob Jenkins Associates, of Chicago, composed the music.

But it wasn’t all fun and games.  Several serious incentives were offered to businesses considering relocation or opening branches in the Quad-Cities—or even transporting their goods through what was advertised as a “personal Port of Entry and Foreign Trade Zone.”

That’s pretty cool! You wouldn’t happen to have a copy of that Quad-City theme song around?

We have a copy on 7 inch vinyl in our collection, which we’ve digitized and posted on another blog post for your listening pleasure. We also have a brochure with the lyrics in our ephemera files.

There’s a river
A stream that works while it plays.
A road through history
Down to the shining sea.
This mighty, rollin’ river,
tells me that I’m home
Where I can build my tomorrow.
Where I can live with the river
Flow with the river and be free.
Quad Cities U.S.A.
Growin’ stronger every day
Quad Cities you’re the place I want to be.
I want to be.

On this good land
The seasons flavor my life.
And it’s good to know
Of things that live and grow.
I can raise my family
Where the good life’s gonna be.
And I can build my tomorrow.
Where I can live on the good land
Grow with the good land and be free.
Quad Cities U.S.A.
Growing better every day
Quad Cities you’re the place I want to be.

Bad Behavior has blocked 896 access attempts in the last 7 days.