Recently, we explained how we uncovered that the man we—and everyone else—had thought was the first City Marshal of Davenport . . . wasn’t.

But this had us researching what the City Marshal—a position that no longer exists—originally did, and when he stopped doing it.

Luckily, a full range of shelving in our archive is filled with cartons full of City Council papers!

According to several documents, the City Council did a major update on ordinances and job expectations in 1866—and the position of City Marshal, as it happens, was updated quite a bit.

Prior to that year, the Marshal was the official head of the police force, whose responsibilities included upholding and enforcing city ordinances and keeping the peace. When needed, the Marshal was also expected to collect taxes for the city.

But after September 1866, the Marshal’s duties were moved into tax collecting, building inspection, wharf security, and the regulation of weights and measures in the city to avoid corruption to name a few duties. He could still arrest people, but every day police enforcement would no longer be his main job.

In his place, the Chief of Police position became the official head of the police force. Interestingly, we find in the 1863 Davenport City Directory Mr. Daniel H. Severance listed as Deputy Marshal and Chief of Police while James W. Means is listed as City Marshal.

It is beginning to appear that the separation of the duties of City Marshal had begun a few years prior to 1866, but wasn’t officially written into the ordinances until that year.

We certainly aren’t done trying to find when the title of Chief of Police came into existence. We are hoping more documents in the City Council papers will shed light on this question.

What is clear is that these ordinance changes in 1866 helped to create the Davenport Police Department as we know it today. 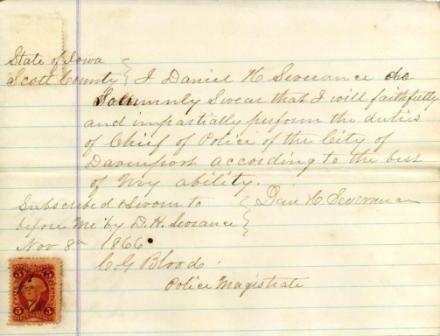 November 8, 1866–Daniel H. Severance is sworn in as the Police Chief of Davenport, Iowa

(posted by Sarah and Amy D.)