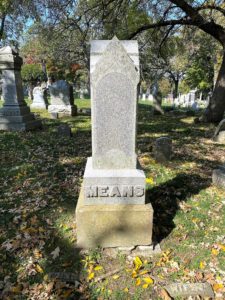 James Wilson Means was born in Pennsylvania around 1824, reared and married in Ohio, and then settled in Davenport around 1855 with his young family.  By the spring of 1883, Mr. Means was a respected officer with the Davenport Police Department.

One block away from the station, at the corner of Fifth and Brady, Mr. McAuliffe, who was not wearing handcuffs, grabbed part of an iron fence and refused to let go.  A scuffle ensued and grocer Ed Moore, who was walking nearby,  heard the two men struggling.  He ran to the police department and alerted Officer E. A. Tilebein of the commotion.

According to witnesses, Mr. McAuliffe looked down at Officer Means before turning and walking up Brady Street.  Several business owners and pedestrians rushed to assist Officer Means.  Officer Tilebein arrived, instructed those nearby to call a doctor and went in pursuit of Mr. McAuliffe.  He was caught one block away and quickly taken to the police station*.

As more officers arrived, the stricken man was carried back to the station on a stretcher.  The doctor arrived quickly, but Officer Means died before reaching the station.   An autopsy was performed and the cornor concluded that heart disease or a heart attack was the cause of death.

The city went into mourning.

Mrs. Elizabeth Means, his wife of thirty-five years, was called home from a daughter’s out of town residence where she had been visiting.  She was joined by their four children at the family home at 219 East Twelfth Street where the funeral took place the following afternoon.

During the years he had lived in Davenport, Mr. Means had served as City Marshal,** as a member of the Board of Supervisors of Scott County, as a private watchman, a special policeman, and an officer with the Davenport Police Department.  He was also a member of the former Fire King Volunteer Engine Company, State Lodge of United Workers, and Davenport Lodge of Odd Fellows.   His  funeral was well attended by citizens, police departments, and fraternal and volunteer organizations.

After religious services in his home, Mr. Means’ coffin was escorted by family and a large procession to Oakdale Memorial Cemetery.  The escort was headed by Davenport Police Chief Kessler, Marshal Miller of Rock Island, and Marshal Kittleson of Moline. Following behind these officials were every available officer from the Davenport, Rock Island, and Moline Police Departments.  Members of Mr. Means’ various fraternal and volunteer organizations brought up the rear.

The procession walked from Brady Street, to Locust Street, to Grand Avenue where everyone boarded street cars bound for Oakdale Cemetery.  Once at Oakdale, the funeral concluded with burial and honors by the Odd Fellowship and the order of United Workman.* 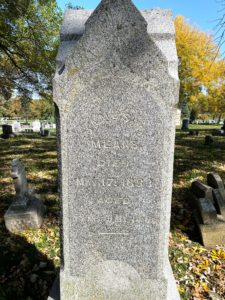 Officer Means was not the first, nor the last, officer to die while on duty at the Davenport Police Department.  While his death was health related, we remember Officer Means and all the officers who have given of themselves for our safety and protection during National Police Week 2011 (May 15 – 21).

Davenport Police Officers Killed in the Line of Duty:

*The Davenport Daily Gazette, May 22, 1883 on Pg. 6 noted that Chief Kessler had released Mr. McAuliffe on Friday, May 18th.  Kessler felt the “…sad circumstances surrounding the case were sufficient to impress him deeper than any legal punishment.”  Mr. McAuliffe was reported to be from rural Wilton, Iowa.  A town not to far from Davenport.  He was not known to have been in any trouble with the police before the morning of May 17th.