Who would have thought that a man from the small town of Muscatine, Iowa, would have been the first person to offer to raise African American troops to serve in the Iowa regiment during the Civil War?

First, one probably would have thought it would have happen in one of the larger towns, like Des Moines or Davenport.

Secondly you probably would not have expected that man to be African American.

But that’s because you don’t know about Alexander Clark.

Alexander Clark was a man who was not afraid of a challenge. He wore many hats in his lifetime: barber, orator, lawyer, editor, entrepreneur, and eventually U.S. ambassador. He was also the man who sued in the Supreme Court of Iowa and won for segregation in education to end in Iowa more than 85 years before Brown v. the Board of Education.

And during the Civil War, he would become a soldier.

Initially, Clark’s request to recruit African-American soldiers was turned down, but with the ongoing challenges of the Civil War, his offer was accepted.

Clark initially enlisted 50 men by giving them each $2.00 of his own money—a huge sum in 1862. Eventually, almost every man of African descent in Iowa capable of performing military service joined.

On July 27, 1863 the Secretary of War authorized the formation of the First Regiment of Iowa African Infantry (later called the Sixtieth Regiment of Infantry United States Colored Troops ) under special order from the War Department.

The Regiment joined the War on December 4, 1863. Alexander Clark went with them, as a
sergeant major.

After the war, Clark went on to become the U.S. ambassador to Liberia. He died there in 1891. 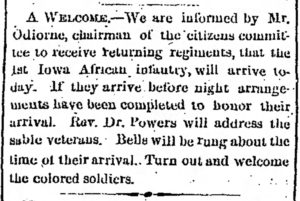 1 Response to Alexander Clark of the First Iowa African Infantry