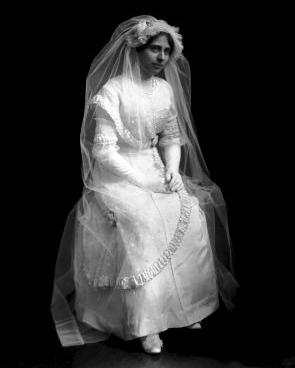 The Davenport Democrat describes the bridal gown [pictured here in a portrait by Hostetler] in an article published that same day:

“The dress was made of white crepe de chine made over white silk, and draped in one-sided scarf effect, with princess lace that was edged with shirrings of the crepe. The wedding veil of lace and tulle fell from a wreath of green and white and the bridal bouquet was of bride’s roses and ferns.”

Alma was the daughter of Mr. Charles and Albertine (Loehrer) De Beaulieu. She worked as a bookkeeper for M. L. Parker Co.’s The Fair department store, which was located at 120-124 West 2nd Street in Davenport.

Dr. William C. Vollstedt was the son of Hermann and Anna (Meier) Vollstedt. He was a graduate of the Chicago Veterinary College and had been practicing as a veterinary surgeon at 114 Harrison Street in Davenport for over a year.

Following the ceremony, there was a wedding breakfast at the home of the bride at 723 Belle Avenue. The couple left on a morning train to Chicago, where they would spend their Honeymoon. They were to return after November 15, and they would make their home at the Walker apartments, 108-112 West Fifth Street in Davenport.

The Vollstedts moved to Dixon, Iowa in 1925, where Dr. William served as mayor. William died on March 31, 1959 at Mercy Hospital in Davenport. Alma died on June 29, 1969 in her home at 2004 Main Street in Davenport. They are buried at Davenport Memorial Park.

Iowa State Board of Health. “Return of a Marriage to Clerk of District Court.” In Scott County Marriage Certificates and License Returns. Davenport, Iowa, 1912.