Quota Club International Incorporated was chartered on February 6, 1919 in Buffalo, New York. It was the first international women’s club and was made up of professional women. Quota is a Latin word that means “A share of one part to a whole”. Their motto was “We Share” and their slogan was “Quietly Utilizing Our Total Ability”. 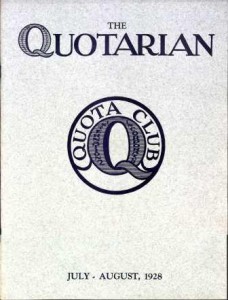 The statement of purpose: “To associate together and to further the welfare of women engaged in the arts and professions, or in the distribution of commodities; To promote friendly intercourse among its members and to encourage co-operation and investigation in matters pertaining to general business; To apply ethical standards to business relationships, and to standardize and disseminate among Quota clubs, Quotarian principles and practices of the fair dealing gospel of ‘Do unto others as you would have others do onto you’ in private, social, civic and business life; To promote co-operation between Quotarians in the development of the various lines they represent; To quicken the interest of each member in public welfare.

The club was intended for mutual and general uplifting, to promote business ethics, encourage friendships and to cooperate in civic betterments. They believed they could help make the world a better place by improving themselves. The members of the club were asked to refrain from using the prefixes Miss or Mrs., and instead call each other by their first names.

The Quota Club of Davenport was organized in September of 1923. Founding members were Frieda Plath, Mary Tierney, Agnes Gosch, Gertrude Jenne, Flo McNitt, Mary (Ryan) Bollinger, Anna Canty and Mabel Palmer. They met on Thursdays at noon at the Hotel Blackhawk. The Davenport club was the farthest west at the time of its founding. It was also the first club to have a local objective – the encouragement and promotion of the underprivileged girl through interest and co-operation of Quotarians.

Mabel H. Palmer was named President of Quota Club International, Inc. for the year 1927-1928. The Quota Club’s annual convention was held on June 27-29, 1928 at the Hotel Blackhawk. Volume 7, Number 1 of The Quotarian listed the International Headquarters and Editorial Offices as 808 Brady Street, Davenport, Iowa.

The Quota Club of Davenport appears in the Davenport City Directories until 1972.