As February 29, 2012 arrives, most of us will only give it a passing thought. Others, like Leap Year babies, will be able to blow out birthday candles on their actual birthday.

Maybe even a few adventurous couples will decide to get married on this day.  After all, Leap Year has been associated with romance for centuries.

While there are many myths associated with Leap Year, or Leap Day, most have to do with the idea that women were allowed to ask men to marry them during this special time. Some date the concept back to the 5th century with an agreement between St. Patrick and St. Bridget. Others date it to 1288 and a decree by Queen Margaret of Scotland. Still others say this idea of romantic turnabout dates from the 1600s, 1700s, or 1800s. Clearly no one knows who started the idea that a woman could propose to a man during A) A Leap Year, B) A Leap Month, C) A Leap Day—even the time frame when a lady could ask for a man’s hand changed over the years).

By the late 1800s into the early 1900s, one is able to glean from local newspaper articles that amusement over the concept of women asking men to marry them ruled the day. Small comments in the newspapers warned men to be weary of husband-hunting females. By the 1900s, District court clerks even offered a free marriage license to the first couple to acknowledge that the woman had proposed to the man during Leap Years. In 1928 The Davenport Democrat and Leader of February 5th printed that the free license offer made by district court clerk Harold Grumstrup was accepted by a Miss Helen Calvert of Davenport who proposed to Vale Pestle of Davenport. The couple were married by Reverend Harry Harned of the Congregational Church and settled in Rock Island to begin married life.

Leap Year themed card parties, thimble parties, teas, and dances were amusing ways to celebrate the date. One Leap Year party held on February 27, 1896 at Library Hall seems to show the good humor of the day as the ladies switched social roles with the men for the evening. The Davenport Daily Times of February 29, 1896 gave coverage to the event and all of its humor. 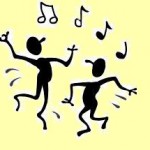 Dancing commenced that evening with ladies not only being allowed to ask partners to dance, but they were also allowed to walk the floor to search out men for each dance. Other rules for the women to follow included dedicating themselves to the comfort of their gentlemen guests, never allowing a man to cross the dance floor unattended, to make sure no man was left as a “wallflower”, offer gentlemen refreshments or air when needed (it was stressed that standing by an open window with a gentleman was more than enough in the way of getting air), always return a gentleman to a good elevated seat after a dance, and the women were never to smoke cigarettes.

Men, who were given fans to carry for the night, had a list of instructions as well for the evening. They were directed to be delicate in their demeanor, blush when addressed by a lady, lightly touch the lady’s arm during a walk around the floor, say “no” and “yes” as needed, dance gracefully and lightly on one’s feet, and never leave his seat without a lady’s escort.

One can imagine the frivolity of the evening with men fanning themselves and women rushing to help a gentleman cross the dance floor. The article also provides an interesting insight into what the social rules must have been for men and women during this time period at these events. One wonders who enjoyed letting go and changing their social manners for the evening more. If one of the ladies did take the Leap Year tradition to heart and proposed to a gentleman that night it was sadly not reported.

Whatever you choose to do to celebrate (or not), we wish you a wonderful Leap Year!

Bad Behavior has blocked 536 access attempts in the last 7 days.