The Davenport Civil Rights Commission recently put together a Walking Tour of Davenport, highlighting sites important to the development of Civil Rights in the city.

Landmarks on the tour include businesses, churches . . . and the LeClaire Park Bandshell on 400 Beiderbecke Drive.

Approximately 400 members of the Davenport Catholic Interracial Council gathered at St. Anthony’s Church and marched to the rally. The group was made up of representatives from six Davenport parishes, including the current Mayor of Davenport, Bill Gluba, who was a student at St. Ambrose University.

John Howard Griffin, author of the book Black Like Me was the guest speaker at the rally. Mr. Griffin talked about his experiences in France during World War II and compared Nazi anti-Semitism with the racism he experienced in the South.  About racism, he said it can affect any human being at any time, that the racist is just as dehumanized as is his victim, and that racism leads to the destruction of human beings.

“We talk about giving the Negro his rights as though they were ours t dispense, he said. “Whom do we think we are?” he asked “The Negro has his rights from God just like the rest of us”.

Rock Island NAACP Leader Mel Pettis also spoke at the rally. He listed some of the challenges in getting African-American officers in the Davenport Police Department and Scott County Sherriff’s office. He pointed out the lack of diversity in the courthouses and city halls. He criticized the realty companies, loan companies, the labor unions and other organizations. He also accused city administrations of being in collusion with absentee landlords to ignore breaches of building regulations and of maintenance standards of homes in African-American neighborhoods.

Msgr. J. D. Conway said that discrimination exists in Davenport, but that “here it is more hidden and genteel” that it is in the South. He called discrimination a moral evil that each individual is responsible for. He said that by being at the rally, everyone in the audience was now committed to the cause of racial justice.  “You know and your neighbors know where you stand on this issue now.” 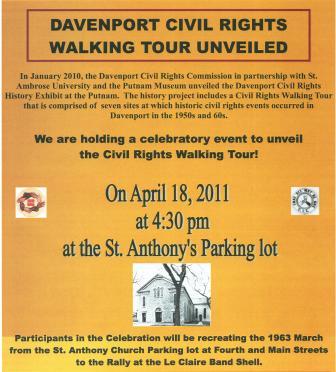 Bad Behavior has blocked 764 access attempts in the last 7 days.