The river frequently froze over smooth, and made wonderful skating, particularly distance skating.  A favorite stunt was to skate from Davenport downstream as far as Rock River—a matter of five or six miles.  Sometimes, if there happened to be a strong west wind, we could open our overcoats and sail way back to Davenport, at fairly good speed, without taking a stroke with the feet . . .
(Edward Kunkel, “I Remember This . . .” Davenport Daily Times, 26Sept1961, p.123)

Ice skating has been popular in these parts since people discovered ice is slippery.

The pre-dammed Mississippi, of course, was the earliest and biggest “rink.”  Edward Kunkel, whose memories are quoted in this post, was born in 1871, when residents had to use their common sense (or lack of it) to judge when the skating season was open.  But by the 1920s, the city had the responsibility of testing the ice near Credit Island for safety—if it passed the test, the snow would be cleared away for fun and games. 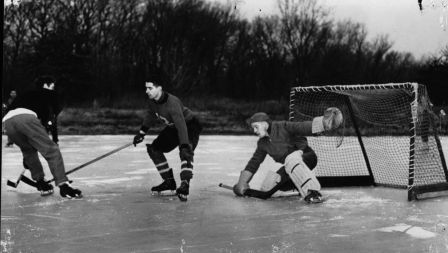 Other popular skating places were the pond . . . the Fair Grounds and a privately operated open air ice rink occupying the square block between Brady and Main and 17th and 18th Streets . . . where you could skate as long as you wished for a nickel, except on band concert night when he had a band playing in a bandstand at the center of the rink.
(Edward Kunkel, “I Remember This . . .” Davenport Daily Times, 26Sept1961, p.123) 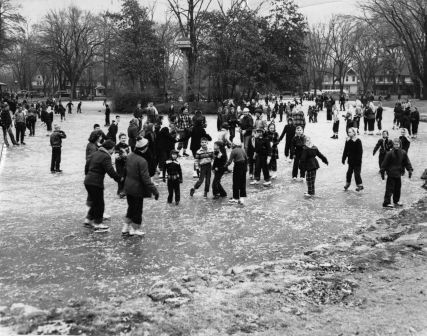 The Fair Grounds, which were used to establish Central Park in 1885 and renamed Vander Veer Park in 1912, has been the skating venue of choice for many years.  The annual Silver Skates races were often held there as well, with children and adults competing for prizes and bragging rights. 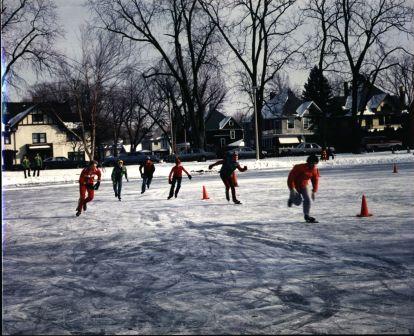 The lake in the Park was so popular that in 1924, the skaters asked the Park Board to have a checking booth installed so that all the boots, sweaters, and skating bags could be more easily managed.  Losing one’s boots in the middle of an Iowa winter is no joke! 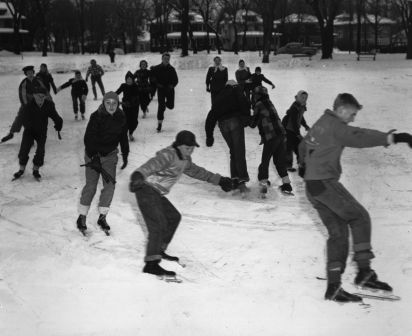 It’s been too warm for ice so far this season, but Iowa winters rarely pass by without freezing temperatures, so there’s still hope for skaters.  Of course, nowadays one can skate indoors year ’round,  but as Mr. Kunkel might have told you, it just isn’t the same!

Bad Behavior has blocked 798 access attempts in the last 7 days.