This past Saturday, September 17, 2011, the Quad Cities River Bandits became the 2011 Midwest League Champions by beating the Lansing Lugnuts 6-3 at Modern Woodmen Park in Davenport.

145 years ago, on Thursday, October 20, 1866, The Rock Island Wapello baseball club, which had formed earlier that year, won their first tournament by beating the Enterprise club of Peoria 85-54 in Peoria. They took home the $100 prize—and the $25 prize for best throwing went to pitcher Mansfield Sturgeon.

The first recorded game in the Quad Cities also took place in 1866, when the Wapellos played against the Davenport Union baseball club. The game was played on the level ground near the stone schoolhouse on West Third Street, at 2:15 pm. The Wapellos won that game 118-7. In those early days, the pitchers did not throw the ball overhand, so strikeouts were rare. And players did not wear gloves, so there were not a lot of fly outs either. If a player made contact with their bat, they were most likely going to score a run.

The Rock Island Wapello baseball club won every game they played for 4 years, but disbanded after their first loss in 1870.

We recently digitized a set of 13 cartes de visite of the players, an early version of today’s baseball cards. The photographs were taken by George Solander, the first baseman who was a photographer for Newberry & Solanders in Rock Island. The players are wearing their uniforms, which were blue Turkish pants, white linen shirts, belts with the team name “WAPELLO BBC”, and blue caps trimmed with red and topped with a white button.

On August 5th, 2001, the cards were sold at an auction in Rosemont, Illinois for eighteen thousand dollars. 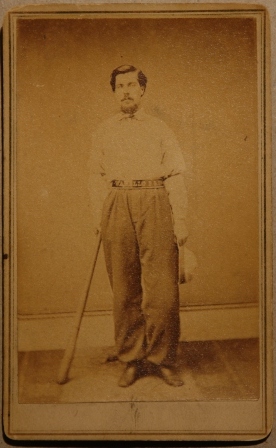 Morning Democrat Centennial. “Take me out to the ballgame.” October 5, 1955.