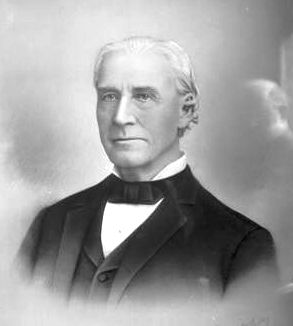 Hiram Price was born on 10 January 1814 in Washington County, Pennsylvania. He and his wife, Susan Betts Price, whom he married in 1834, moved their family to Davenport in 1844. They built their first home on Front Street (now River Drive) between Brady and Perry Streets.*

Mr. Price, a banker by trade, was a civic-minded man—and possibly one of the busiest men in the history of Davenport, Scott County, or Iowa. He was appointed the Scott County School Fund Commissioner in 1847, the Scott County Recorder and Treasurer in 1848, and was elected to the Davenport City Council in 1852.  He held all of these posts until 1856, during which time he also assisted in drafting Iowa’s first Prohibition bill, which became law, briefly, in 1854, and was editor of the Temperance Organ.

After the Kansas-Nebraska Act of 1854, which was viewed by Price and many others as an attempt to establish slavery in the north, he left the Democratic Party and helped establish the newly created Republican Party in Iowa.  In 1859, he became the president of the State Bank of Iowa.

When the Civil War began in 1861, Hiram Price assisted in raising the money to enable Governor Kirkwood to equip the first 2 Iowa regiments. He was an advocate of the most energetic war measures and of legislation to strengthen the credit of the Government.  Soon, he was appointed Paymaster of the State of Iowa, and fought to not only send regular paychecks to the Iowa Volunteer soldiers, but to equip them with the basic necessities.  While acting as Paymaster, he made the acquaintance of Annie Wittenmyer, the first female Sanitation Agent in Iowa.  Later, Mr. Price was instrumental in the founding of the Iowa Soldiers Orphans Home.

In 1863, Mr. Price was elected to his first term as a United States Representative, where he argued in favor of the proposed Bureau of Freeman’s Affairs. He was reelected for a second term in 1866, and in his acceptance letter, stated:

“We who are styled ‘radicals’ seek to make all men equal before the law, to give all men in every State equal rights and equal protection, so that in the future any person may travel from one State to another conscious that wherever the American flag floats he will be secure in person and property. Heretofore this has not been so. We seek to crystallize into a fact the theory of the past, that ‘all men are created equal’. We wish to re-enact the Declaration of Independence so that all men everywhere shall understand and know that is means what is says.”

After the War ended, Mr. Price did not visibly slow down.  Already the secretary of the Mississippi & Missouri Railroad since 1869, in 1873, he became the president of the First National Bank of Davenport as well.  Five years later, he was elected again to the House of Representatives, after which, in 1881, he was appointed the United Stated Commissioner of Indian Affairs.

Before he left Davenport for Washington, DC, he provided funds for a free reading room in the public library of Davenport.

Hiram Price died on May 30, 1901—Memorial Day— in DC and was buried in Oakdale Cemetery in Davenport, Iowa.  His obituary reads, in part:

“Mr. Price never bore arms, was never in the ranks of the men who followed the flag, but he was one of the grandest soldiers the North had in the struggle for the preservation of the Union. He was one of the stay-at-homes who made it possible for other men to go to the front. From his own means and the credit he could command, Hiram Price quartered and subsisted some 5,000 Iowa boys who had volunteered for the infantry and cavalry armies. He was not thinking so seriously about payment as he was of getting boots and blankets within reach of the foot-sore and shivering volunteers.”

*The house was later known as the Peck Home.

“Hiram Price, Davenport statesman and patriot is gone.” The Davenport Democrat, 31 May 1901, p. 4

Price, Hiram. “Letter of Acceptance.” A printed letter to some of my friends (Washington, 1889).

Bad Behavior has blocked 2641 access attempts in the last 7 days.