Many Scores to Settle

Among our collections of genealogies and local histories, death records and newspaper abstracts hides a different kind of historical resource:  Musical scores. 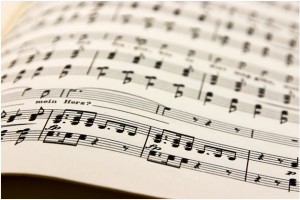 In Special Collections, we have several catalogued scores, most of which have local connections, from Davenport by Alfred E. Petrow (1915) to piano arrangements for some of Bix Beiderbecke’s pieces.

The Davenport Centennial March, written by Herman Schmidt in 1936 and Albert Petersen’s the Mississippi Valley Fair Boosters March song (1924) were written for specific celebrations.   The Wild Rose of Iowa, by Erwin Swindell, and Bix’s Davenport Blues are sentimental commentary.  But they all use music to describe our area and our people during the time they were created.

Our uncatalogued ephemera files include many, many past and present Official Songs of Iowa, including Iowa, Beautiful Land by Horace Towner, who later, became the governor of Puerto Rico.

Not all of our music was commercially published.  Kent Gannett  (1887-1967) taught vocal music at Davenport High School (now Central) from 1924 to his retirement  at the end of the 1952 school year.   He was an accomplished composer and musician and won awards for his work.

Before his death, Mr. Gannett donated his compositions and arrangements—most of which were performed between 1940 and 1960—to the Davenport Public Library.  These scores run from original symphonies to whimsical pieces with names like At the Supermarket (With Squeaky Cart).

So, if you’re interested in not only seeing history, but hearing it, why not visit the library and look over our musical selections?  Our materials don’t circulate, but you could make a photocopy of Wheatland’s own Whizz Bang Orchestra’s Harmony Waltz, as first herd in 1920, for only ten cents a page.

That’s a small price to pay for a piece of our musical history!