Riverboats We Have Known: The W.J. Quinlan

After something of a delay, it’s finally looking like spring in the Quad-Cities: the weather is warmer, the boats are on the Mississippi . . . and the orange construction barrels are in full bloom.

The promise of bridge delays for the foreseeable future is having an adverse effect on the good humor of drivers used to zipping from the farthest of the Iowa Quad-Cities over the Mississippi to the furthest of the Illinois Quad-Cities (or vice versa) in little more than 20 minutes, even while keeping to the posted speed limits.

It is obvious, at least to commuters, that Something Must be Done. Unfortunately, looking to the future doesn’t help: flying cars and jet packs won’t be ready for the general public for at least a couple of years—and even if they were, such high-powered gadgetry probably wouldn’t alleviate road-rage or fuel consumption problems.

But some people are looking to the past for a way to combine more speed with less haste and more people with less energy: ferryboats.

And when one thinks of past Davenport ferryboats,*the one that usually comes to mind is the W. J. Quinlan. 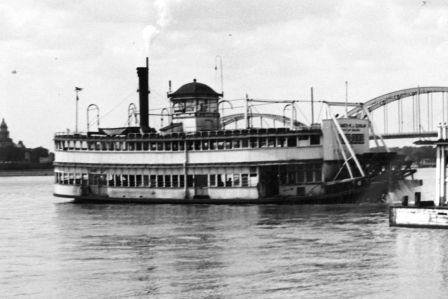 This beautiful steam-powered stern wheeler, built in 1904 by the Kahlke boat works in Rock Island, Illinois, was originally named the Davenport. In 1925, William J. Quinlan bought the boat, refurbished her, and renamed her after himself.

The Quinlan carried businessmen, shoppers, sightseers, and children between Rock Island and Davenport during the day, and offered night tours of the river—plus the use of its dance floor and casino— to couples and gamblers.

After decades of active service, never venturing more than two miles from where she was built, the Quinlan developed structural problems in her hull, and retired to the Kahlke yard in 1946.

Wouldn’t it be wonderful if some enterprising soul could bring her out of retirement, fix her up, and set her to providing peaceful transportation across the river? Unfortunately, that would be impossible—the Quinlan was lost in a dry dock fire in April of 1967.

Which, say those of us who cross the river in our twice-daily commute, doesn’t mean we couldn’t establish another ferry in her honor, at least until Orange Barrel season is well over.

Just call it the WJQ2.

___
*Okay, when we think of past Davenport ferryboats.

15 Responses to Riverboats We Have Known: The W.J. Quinlan