From the Archives: The Masquers

A recent addition to our Archive & Manuscript collection has brought to the forefront visions of Davenport drama and theater clubs.

Davenport’s Friendly House was an early supporter of this creative outlet, first providing the venue for the “Friendly House Players” and later the “Masquers Dramatic Club”. The “Players” were active from 1916 until about 1930 and performed for ten years in Claus Groth Hall, the first building Friendly House owned, located at 1224-1228 West Third Street. A fire in 1925 destroyed that building and all was lost with the exception of one set of Shakespearean costumes which the “Players” painstakingly repaired. These costumes were used again years later in a production, receiving much publicity.

The Friendly House built another building at 303 Taylor and continued the community theater mission, providing an auditorium with seating for 700, a system of univents insuring good ventilation and accoustolith plaster walls. . Although the original “Players” group stopped performing, a new group of enthusiastic Thespians began classes at Friendly House in 1931 and by 1933 they had formed a club and were performing as “The Masquers”.  Trained and often directed by Louise Murphy, a former member of the “Players” herself, this group pleased audiences with productions for the next twenty-plus years. They were the only Davenport theater group to make it through the Depression era and the World War II years. In fact in the 40’s one of their male actors exited the stage at Intermission only to be met and escorted by an officer to play another role…in the U. S. Army! 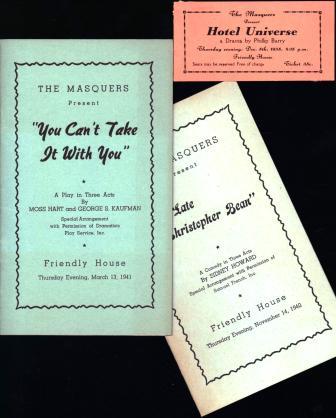 We are delighted to have received scrapbooks kept by Louise Murphy documenting the professional and candid moments of these talented “Masquers” from 1933-1944. Telegrams extending good wishes, tickets, programs, photographic images and many news clippings  provide a sense of the pride and professionalism these Davenporters felt for their craft.  This collection is open for research and provides a fabulous opportunity to explore the cultural and social side of Davenport.

Bad Behavior has blocked 706 access attempts in the last 7 days.