What on earth, you may ask, are Turkey Notes?

Turkey Notes are a Davenport Thanksgiving tradition full of mystery and glamour and fairly bad poetry. They are said to have been around for over a hundred years (though this cannot be confirmed), and are considered to be strictly a local custom.

No one knows for certain why or how or when this tradition started, though the general consensus has the first ones appearing around 1890.

Some say an unnamed local family wrote them once for a large Thanksgiving dinner, and the guests and/or the adult children took the idea home to use the following years, thus spreading the tradition.

Others claim that German immigrants brought the tradition to Davenport and used it to celebrate their first truly American holiday.

A third hypothesis suggests that a savvy teacher invented the Notes in order to keep her holiday-minded students under control.

All of these theories are plausible, interesting and, so far, unable to be confirmed.

So what is a Turkey Note?

Simply put, a Turkey Note is a short, three- or four-line poem, using “Turkey” as the first word of the first two lines. Purists use colors for the second word of these first lines, but this is not strictly necessary.

The poem can be a compliment, an insult, or just funny—depending, of course, on your sense of humor:

The poem, which is usually left unsigned (and no wonder) is rolled into a tube and wrapped in colored paper, which is tied at both ends with string, yarn, or ribbon. These are left by the side of each plate at Thanksgiving dinner or are passed out to friends, like Valentines.

And in case anyone scoffs at the enduring influence of Turkey Notes, we would like to share with you an e-mail we received from a gentleman who read the related article on our website. The subject of his message is “Turkey Notes from the Davenport Diaspora”:

My Grandpa, Robert Herzberg, was raised in Davenport but moved to Wyoming before World War II where he finally settled. He liked to tell stories of his days in Davenport working at a place called the Sugar Bowl across from one of the schools (which of them I don’t remember)… how he loved the buttery popcorn, and how bananas came in wooden crates from Central America. To me, the stories were interesting because of the time in which they were set, not necessarily the location. But it turns out that our family’s long tradition of writing Turkey Notes for Thanksgiving dinner can be traced back to a single place on the map.

What I find particularly interesting from the Library’s description of the Turkey Note is its strict format, a mere shell of which reached Wyoming with Grandpa. In our family, Turkey Notes often begin with “Turkey Says” before descending into the poorly structured, partially rhyming, stumbling poems they are. My Grandpa, who did most of the composing, would sometimes weave current family events into his Turkey Notes… something about me getting an A on a recent spelling test, or my cousin winning a ski race. He could tease with his Turkey Notes, poking fun at my father for buying a herd of cattle at the age of 42 (crazy idea!), or razzing me about a girlfriend. They could be serious too; when his wife finally lost her battle with cancer, Grandpa’s Turkey Notes became startlingly emotional and moving. Mostly, though, they were just fun.

I love everything about the Turkey Note. I love the colored tissue paper (ours are fringed on 3 sides and rolled so that the turkey note bristles with color), how the Turkey Notes lie temptingly near the plates until suppertime, and how only the author is able to read them cleanly without making a mess of it. Inevitably, the reader butchers the meter or the rhyme, leading to protests from the author and laughs from the lookers on. It’s a great tradition.

Anyway, I’d like to thank the Davenport Library for helping me solve the Turkey Note mystery.

p.s. I attach a photo I took of a Turkey Note my Grandpa had on display near his workbench since I was a boy. Judging by the 1980’s clip art and blocky font (and the typo), I’d guess I composed it when I was in elementary school. 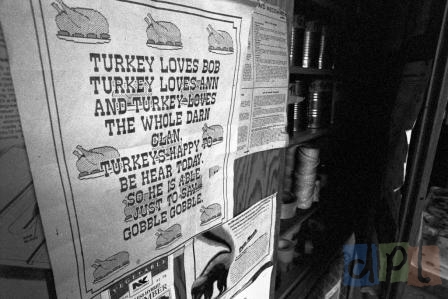 ***
So, for those of you who have continued the tradition, we salute you—write on.

For those of you who haven’t, why not try it? Literary talent is not necessary and can even get in the way!

And for those who think the whole thing is too ridiculous for words, we leave you with these words: