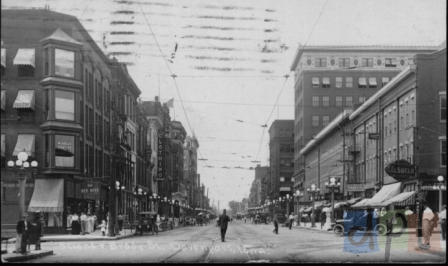 There has been some press in the last year regarding a need for revitalization of Davenport’s Brady Street. Perhaps a look back in time might encourage those who are attempting to create positive change for the future.

The building of railroads into the city created expansion of Davenport’s business section from original properties along Front Street up to Brady during the 1850’s. By 1909 Brady Street had become the principal thoroughfare of the city.

Ninety-nine years ago on the 17th of November a group of business men, organized as the Brady Street Progressive Association, proudly celebrated the lighting of Davenport’s “Great White Way” when they presented “the best lighted thoroughfare in the city” to its citizens. An artistic black iron support held five white globes of electric light. With sixteen lamp posts in each block the Association boasted a “combined candle power capacity of 10, 560”, furnished by the Peoples Light Company.

The night they turned the lights on “From the Fifth street viaduct to the river, the street was one flood of light, and over this entire stretch was scattered one of the largest and densest crowds ever seen gathered in one spot in Davenport. Thousands were present.” reported The Daily Times newspaper the next day. The festivities included brass bands, a torch parade, “pounds and pounds of confetti” and all kinds of mementoes and souvenirs given out by the businesses including pictures, flour, coffee, canned goods, flowers, postal cards, song books, buzzers and other devices. As the crowd surged from one end of the street to the other the mayor proclaimed Davenport was on the eve of a great awakening and that this occasion marked a new epoch in the history of the city.

Like Loading...
This entry was posted in Local History and tagged Brady Street, Davenport (Iowa). Bookmark the permalink.

Bad Behavior has blocked 623 access attempts in the last 7 days.