History’s Mysteries: An Image of Prohibition?

While researching a possible blog entry about Prohibition and Davenport’s various coping mechanisms, we found an image in our collections that gave us pause: 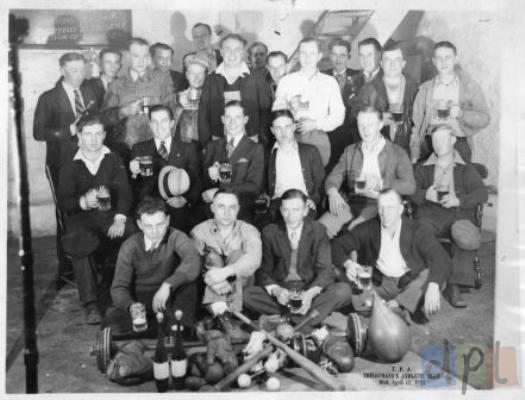 This group image of Thiedemann’s Atheletic Club was taken on April 12, 1933, at Thiedemann’s , a brewery and tap at 1848 West 3rd Street. As you can see, the men are holding half-full mugs. A note of the back of the photograph says that it was taken “shortly” after Prohibition was repealed.

Here’s the problem: The 21st Amendment, repealing Prohibition, wasn’t signed until December 5, 1933. The first state to ratify the Amendment (Michigan) had signed on April 10, 1933, but Iowa didn’t hop on board until July. So either these men were celebrating the repeal a tad early by taking incriminating photos in a speakeasy that sponsored a sports team, or the date of the front of the image is wrong. Or there was something else going on.

The simplest explanation is near beer.

Near beer was a legal exception that kept some breweries open and productive. Non-alcoholic beer wasn’t the same as Davenporters were used to, but at least it didn’t explode like the homebrewed stuff often did. And it was easy enough to put the zing back in with a shot or two of whatever the local speakeasy or neighborhood bootlegger had on sale. There were also rumors that a few local breweries—always nameless in the newspaper articles– often ‘forgot’ to keep the alcohol content down if there weren’t any federal agents around to remind them.

According to the city directories, Henry Thiedemann sold soft drinks, which included near beer. Of course, many other innocent beverages could have been in those mugs. But in that case, why was someone concerned enough to make a note on the back of the photo?

But regardless of exactly what is in those mugs the young men are holding, we are sure Thiedemann’s—and the photographer—meant no harm.

Eight months later, it was all moot, anyway.