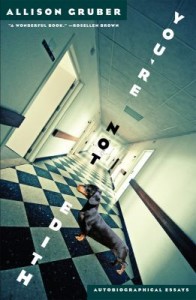 The English student in me cringes whenever someone says, “Let’s read an essay” because in my mind, the term “essay” is still equated with the five-paragraph, three-reasons-why type essays that you had to write in high school. When I was flipping through Allison Gruber’s You’re Not Edith, a book exclusively filled with autobiographical essays, I noticed that instead of the traditional format, her essays read like chunks of a story broken apart for relief, flashback, comedy, and a wide variety of other purposes. I started reading You’re Not Edith and discovered that I was in fact reading an autobiography with much shorter chapters, something that my brain found easier to digest because there were breaks where I could stop if I had to go do something else and I found that I was able to finish this book much quicker than I was other books. Books containing autobiographical essays have begun to grow on me.

In You’re Not Edith, Allison Gruber reflects upon her entire life as she’s experienced it so far. Just like in her life, Gruber takes risks when she explodes her life into these essays for readers to dissect. She pulls no punches as she describes how she tried to use her fascination with Diane Fossey to help her win her girlfriend in high school or how she was diagnosed with breast cancer as she was teaching at the collegiate level. Gruber is a hilarious writer who speaks with shocking candor and isn’t afraid to tell the truth about her struggles with cancer and how she figured that even though she wouldn’t allow others to take care of her, she would still be able to care for Bernie, a little dachshund who didn’t fit her perfect ideal of the Edith dog, but ended up being exactly what she needed.

I encourage you to pick up this book to check out her feelings on weddings, her father’s mental problems, and how she came into her own through music, drama, English, and many other interconnected things.