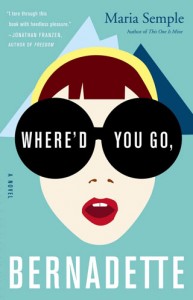 After hearing a glowing review on NPR praising this witty and charming book, I quickly placed a hold on a copy of Where’d You Go, Bernadette? by Maria Semple.  Told primarily through emails, faxes, letters, and transcripts of taped conversations, the novel explores the events leading up to agoraphobic housewife Bernadette Fox’s disappearance.  She and her Microsoft bigwig husband promise their gifted daughter Bee that if she gets straight A’s at her prestigious middle school, she can have anything she wants as a graduation gift.  Bernadette’s worst nightmare comes true when Bee succeeds and chooses a family trip to Antarctica.  She attempts to cope with this sudden obligation to be around (gasp) people; she even hires a virtual assistant in India to make all the vacation preparations!  That’s why it is such a shock when Bernadette disappears just before they are due to embark on the trip.  Bee compiles these documents looking for clues, hoping against all evidence that she can bring her mom home again.

Semple was a writer for Arrested Development and it shows in this book, in which witty dialogue and over-the-top scenarios abound.  Bernadette’s feud with the PTA moms at Bee’s school, most notably with the one who lives next door, is ridiculous and hysterical.  Neighbor tresspasses to insist that Bernadette remove some unsightly blackberry vines?  Better erect a 5 ft. x 8 ft. billboard telling her to stay off the property, of course!  But despite all of the wacky humor, at the heart of this novel is a very touching mother-daughter relationship.  Bee will stop at nothing to find out what happened to her mother, and it is her unconditional love and determination that will render you unable to stop reading until you find out how their story ends.