Long ago and far away, I was unaware of the rise of the webcomic. That was until, a coworker (two, actually) began sending me links to blogs and Tumblrs they thought might fit my odd reading preference. And boy, did they create a monster!

For the uninitiated, a webcomic is exactly what you think it is – a comic on the web. Some are ongoing, newspaper-like strips, others tell a story that may or may not have a ending, some are even interactive! What is great about webcomics is that by their online nature, they are not limited to the printed page, nor must they conform to traditional storytelling standards.

Some webcomics, having been successful online, have published their webcomics as books. Some, like Noelle Stevenson’s “Nimona” or Kate Beaton’s “Hark! A Vagrant!” were picked up by major publishers. Others are printed using funds raised from Kickstarter, like “Derelict” by Ben Fleuter or “Ava’s Demon” by Michelle Czajkowski. Either way, it’s a fantastic trend and exposes webcomics to an even larger audience.

Here are some of my favorite web-to-print collections: 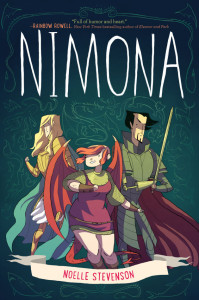 Nimona by Noelle Stevenson – Set in a futuristic medieval world, Nimona, a young and impulsive shape-shifter joins up (well, forces her way in) with the supervillian Lord Ballister Blackheart. Blackheart, who was once a knight and lost his arm in a joust with Sir Ambrosius Goldenloin, the kingdom’s champion. As Nimona and Blackheart pit themselves against the Director of the evil Institution, it becomes clear that no one and nothing is at it seems, especially Nimona.

You can check out the full comic from DPL (which I highly recommend) and see Stevenson’s other work on her blog and Tumblr. It’s especially worth it for the occasional non-canon “Nimona” mini stories she draws, and her obsession with “Hulkeye.” 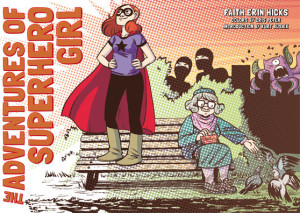 Adventures of Superhero Girl” follows our young superhero as she leaps tall buildings and clashes with the ninjas that seem to infest her otherwise boring city. She also faces the very ordinary challenges of being young and broke, social awkwardness and unfortunate cape-shrinkage.  The blending of superhero and the mundane creates a very funny and relatable story, winning Hicks an Eisner Award for Best Publication for Kids. You can check out the print book from DPL here, or read the whole comic online here (in black and white). Hicks creates several other webcomics, which you can check out on her blog here and on her Tumblr. 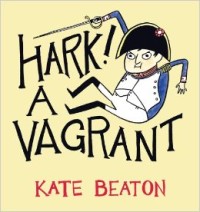 Hark! A Vagrant! by Kate Beaton – History nerds unite! Hark! A Vagrant is a collection of strips previously published on Beaton’s website, plus author commentary and a handful of previously unseen strips. Mixing both the historical and the contemporary, Beaton’s deceptively simple illustrations cast an erudite and witty eye on history, literature and pop culture. I will admit to needing to look up more than a few of the historical characters and events that appear in this collection ( especially those that had to do with Canadian history), but one needn’t be a history expert to enjoy the sheer silliness of the characters’ expressions and one-liners. Beaton also lampoons Nancy Drew, Aquaman, 1980s business women and her younger self, to name a few more modern targets, and the collection includes some singularly hilarious non sequitur strips to boot.

Beaton as two new collections coming out soon, “Step Aside, Pops: A Hark! A Vagrant Collection” and “The Princess and the Pony.” Check out her website here, and her Tumblr, too.

Here are some more webcomics  that I enjoy, some in print and some only online:

Hyperbole and a Half by Allie Brosch – Brosch has a deceptively simple illustration style and a talent for hilarious story telling. Her stories are taken, more or less, from real life and some, especially those about her Simple Dog, will give you stomach cramps from laughter. Brosh has also illustrated her own battle with depression with her signature style. Very much worth reading.

Ava’s Demon by Michelle Czajkowski – A young girl is possessed by a vengeful demon. To free herself, Ava must make a pact with her demon and carry out her plan for revenge and restoration. The art is absolutely stunning, especially when displayed digitally.

Derelict by Ben Fleuter – In a far future, the Earth is flooded and overcome with an alien fog which hides the “Miasmic Races.” Scavenger Dang Thu Mai is simply trying to get by, but her past, and the Miasma, continue to haunt her.

Apothecia by Taz Muir and Shelby Cragg – Eleven-year-old Jessie finds something horrific in the woods. What she does next will change her, and the world.

Red’s Planet by Eddie Pittman – From the animator of “Phineas and Ferb,” the comic begins with ten-year-old “Red” (because she has red hair, you see) as she runs away from yet another foster family. This time, though, it isn’t the police so find her, but aliens! Abducted and taken across the galaxy, she soon finds herself stranded with other abductees – a veritable menageries of strange (and grumpy) aliens.

One Way by Christopher Baldwin – What if the crew of a starship was, instead of being like “Star Trek,” a little bit more like “The Real World”? Sent on a first contact mission from which there may not be a return trip, Captain Francisco tries to keep his crew from killing one another (when you book a one-way trip, you don’t waste your A-team on it). The comic is mostly an on-going gag, but you can’t help but like this crew of total jerks.

2 thoughts on “Webcomics – From screen to page”