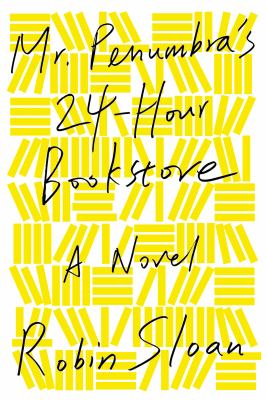 I’m a cover girl. No, not the makeup kind of CoverGirl, but the type of person who makes her personal book reading choices by whether or not the cover art is saying, “You muussttt reeeaddd meeee,” as I meander the stacks of the library or the book store. That eye-catching cover and blurb is what led me to Mr. Penumbra’s 24-Hour Bookstore. I was at a conference and saw a poster advertising an author panel that had Robin Sloan, the author of Mr. Penumbra’s 24-Hour Bookstore, and several other authors that I was vaguely aware of also as panelists. I just happened to be right down the hall, the blurb about their panel was interesting, and bonus: you could get a free book signed by the author if you came. So I went.

I’m glad I did. I picked up my signed copy of Sloan’s book after the panel ended and started reading. Mr. Penumbra’s 24-Hour Bookstore is the story of the mixture of books and technology, the old and the new. The main character, Clay Jannon, was hit by the Great Recession and lost his job as a web-designer in San Francisco. Walking the streets one night, he stumbles upon Mr. Penumbra’s 24-Hour Bookstore and manages to land a job working the night shift. Quickly he learns that the patrons of Mr. Penumbra’s store are not like regular bookstore customers. They come and go at odd hours of the day and never buy anything. Instead they find and select somewhat odd and old volumes, books that Clay has been told not to read or touch, through an elaborate and long-standing arrangement with Mr. Penumbra. His curiosity piqued, Clay opens one of those forbidden books and finds them written in code. He decides to bring in some friends to help him solve the mystery of what these people are checking out, as well as the mystery of what exactly is happening in Mr. Penumbra’s 24-Hour Bookstore.

This book combines elements of mystery, adventure, fantasy, technology, and friendship to bring about a fascinating story of the conflict between the new and the old. Technology and print seem to battle it out within the pages of this book, as Clay soon realizes that Mr. Penumbra’s sudden disappearance from the bookstore has something to do with the mystery books in the store and the people who come to check them out. Add in a secret society called the Broken Spine, something called the Founder’s Puzzle, and Clay and his friends soon find themselves faced off in a race to solve the mystery before the Broken Spine has the chance. Sloan has woven together a story of global conspiracy that draws on the battle between old and new that will leave readers on the edge of their seats waiting to see who will triumph in the end.

This book is also available as a book on cd and as a playaway.

Bad Behavior has blocked 1294 access attempts in the last 7 days.