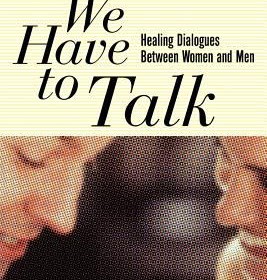 Have you ever thought it would be fun to be a fly on the wall during an interesting conversation? Reading the book We Have to Talk : Healing Dialogues Between Women and Men by Janet Surrey and Samuel Shem is like being a fly on the wall during couples therapy. I find it fascinating how our cultural differences are shaped by gender. Understanding between women and men is often lacking (sometimes comedically, sometimes painfully so). The authors of this book hope to change that.

Surrey and Shem are psychologists who are also married to one another. They have been conducting workshops for married men and women for over 30 years.  Their method, put simply, went like this: first, they invited couples to gather together for a weekend workshop. Fifteen people showed up to the first one: 9 women and 6 men. This included four couples and seven individuals whose partners chose to stay home. First, they gathered as a group to talk. Then, Samuel took the men to a different room while Janet stayed with the women. This is when things started to get real. The group participants shared the honest truth about their relationships among their same-sex peers, where they didn’t have to worry about hurting their partners’ feelings. Finally, they re-convened in the larger group.

What happened next was life-changing. The workshops led the psychologists and the participants to some valuable discoveries about themselves and each other.

They came to the conclusion that even though men and women generally want the same outcome from the relationship (connection), they tend to go about achieving it in vastly different ways. Not only that, but the way in which women prefer to connect (talking to their partners) has the exact opposite of the intended effect.

Women: have you ever been talking to a man and get the sense that he isn’t really listening? Men: have you ever found yourself at the mercy of a seemingly never-ending conversation, getting more and more anxious and trying to figure out some way to get out of it? The authors call this “male relational dread.” According to the authors, men often feel threatened and want out of a conversation with their partners about the relationship as quickly as possible. This often has the effect of leaving the woman feeling abandoned, then angry. Her male partner feels ashamed that his actions have upset his partner. When he tries to reconnect, his active attempts to do so (often in the form of physical touch) are received with- you guessed it- the opposite of the intended effect. The woman feels like she is being taken advantage of and wants out of the situation as quickly as possible.

How are couples to find a way to connect when their attempts to do so are by vastly different methods? Surrey and Shem attempt to answer that question. The key seems to be giving the relationship it’s own identity. It is almost like giving it an anthropomorphic quality. That is to say, whether or not the couple has children, it is helpful to think of the well-being of a third entity – the “we” – in the relationship.  When problems arise, approach it by asking the question “What does the “We” need right now?” rather than from a first-person perspective (“Here is what I need…”) The authors refer to this as “mutuality” and they have found it can make all the difference.

To learn more, check out We Have to Talk : Healing Dialogues Between Women and Men by Janet Surrey and Samuel Shem.

Bad Behavior has blocked 1751 access attempts in the last 7 days.