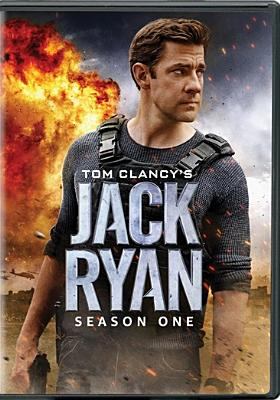 CIA analyst Jack Ryan sits behind a desk, working on a computer. He is not, he repeats, not a field agent. But when he uncovers a terrorist’s plan for a massive attack on the United States and her allies, he is pushed into action and sent on a dangerous mission to end the threat in season one of Tom Clancy’s Jack Ryan.

The story is somewhat familiar: Suliman, a high ranking tribal leader in the Middle East has gathered a group of followers and is planning a massive strike on the West. Working as an analyst, Jack discovers a pattern of suspicious bank transactions that lead him to believe Suliman is planning something devastating. Despite the fact that he isn’t a field agent, Jack’s boss sends him to the Middle East to investigate and stop whatever the terrorist has planned.

Based on Tom Clancy’s books about Jack Ryan, this television series delivers with lots of action, intrigue, secrets and close-calls. John Krasinski as Jack Ryan is likable and relate-able, the every man (although one with considerable gun skills) that is pushed into impossible situations but manages to stay-the-course and come out in one piece. Ryan’s background is hinted out, but never fully explained, we simply know that he served in the Special Forces in the Middle East and was badly injured in battle.