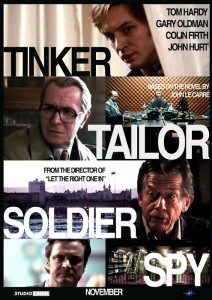 If you cared to, you could do a total immersion TTSS  (Tinker, Tailor, Soldier, Spy) experience using library materials.

Prompted by the recent movie starring Gary Oldman as George Smiley, I went back to the BBC version on DVD, in which Alec Guinness plays the recently retired spy. At the same time, I listened to the BBC radio play as an audiobook. Like the funhouse mirror world of espionage, each iteration was faithful to the original source material of the book in some aspects, and each one  edited parts of the narrative, as well as completely changing essential  plot points.

For example, the catalyst for the investigation of a mole in the 1980 miniseries is a night time chase in the dark woods, while the 2011 movie accomplishes the same end with a shootout in an outdoor cafe.

The TV  version is more thorough and straightforward in its storytelling, while the movie, is, of course, abridged and cinematic. Because it is more elliptical, it is helpful to have read or listened to a more unedited version.

I won’t spoil the ending; suffice it to say, the recent movie rivals The Godfather in it’s elegiac yet violent ending.