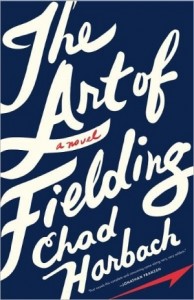 The Art of Fielding follows the tale of Henry Skrimshander, a naturally gifted shortstop, blessed with a powerful throw, catlike reflexes, and an almost supernatural gift for seeing the ball’s path as it comes off the bat. But when his can’t-miss aim misses, breaking the cheekbone of a teammate, Henry’s life – and the lives of his teammates and friends at Westish College – is thrown into chaos.

This novel has generated a lot of buzz and was mentioned on a lot of ‘best-of 2011’ lists. The hype, for the most part, is justified. Multidimensional characters and a lot of pretty language are the strong points; baseball may be boring, but Harbach’s sentences describing it are not. The weaknesses (occasional point of view problems, a plot that requires some definite leaps of faith, and just tons of baseball) are minor. The best thing about it may be the setting: Westish College, a fictional Wisconsin liberal arts school, feels very like Augustana (my alma mater), and a campus novel is always a treat.*

Westish and its people share a near-obsessive devotion to Herman Melville, who (in the fictional universe of this novel) visited the school late in his life and gave a speech. That visit turns Westish into an unlikely center of Melville scholarship, and an adoptee of a new mascot – The Harpooner – in honor of the author. If you’re a fan of Herman Melville and Moby-Dick, you’re going to love the packed house of literary allusions: if not, rest easy. Luckily for most of us, you don’t need to be a Melville scholar (or a baseball fanatic) to enjoy this novel.

*If, like me, you enjoy reading about campus life, by all means check out the novels of David Lodge, especially Small World. Jane Smiley’s Moo and Richard Russo’s Straight Man are also excellent choices.

One thought on “The Art of Fielding by Chad Harbach”

Bad Behavior has blocked 1733 access attempts in the last 7 days.