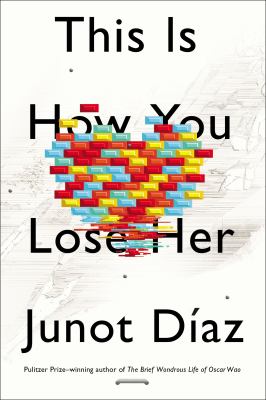 Pulitzer Prize winning author, Junot Díaz writes with a kind of swagger and cool that makes it pretty hard to believe that he’s a creative writing professor at MIT.  Having recently finished reading his third published book, a collection of short stories called This is How You Lose Her, I am convinced that he knows every dirty word in English and Spanish.  Particularly if the words are referencing female anatomy.  So be warned, this is not the novel for anyone offended by salty and sexual language.

But if you can get beyond that, I can’t recommend this book enough. Díaz, himself a Dominican immigrant, tells stories about immigrants that help create a full picture of why someone is who they are. He shows that machismo is often a projection due to a lack of respect, and poor behavior isn’t something to be excused, but it can sometimes be explained. This is never more true than in his semi-autobiographical character, Yunior, the protagonist of most of this collection.

Readers may have met Yunior in Díaz’s The Brief Life of Oscar Wao (winner of the aforementioned Pulitzer) or in his first published collection of short stories, Drown, but I met Yunior for the first time after he cheated on Magda in This is How You Lose Her.  As he cheats his way through many of these short stories — and continues to imprison himself in grief and regret following the discovery of his transgressions — Yunior’s story becomes less about each individual relationship and more about how Yunior’s relationships reflect his own self-image and cultural identity.  The most powerful passages in the novel occur in his home, when we meet his family and see the effects of his father and brother’s infidelity on the family. Equally funny and frustrating, Díaz has written a complicated novel that feels both universal and unique.