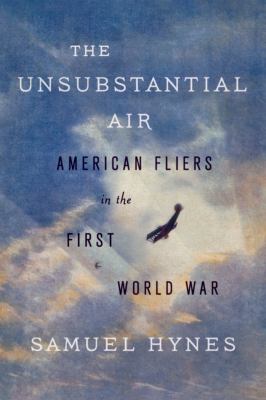 The Unsubstantial Air is the gripping story of the Americans who fought and died in the aerial battles of World War I. Much more than a traditional military history, it is an account of the excitement of becoming a pilot and flying in combat over the Western Front, told through the words and voices of the aviators themselves.

A World War II pilot himself, the memoirist and critic Samuel Hynes revives the ad­venturous young men who inspired his own generation to take to the sky. The volunteer fliers were often privileged–the sorts of college athletes and Ivy League students who might appear in an F. Scott Fitzgerald novel, and sometimes did. Others were country boys from the farms and ranches of the West. Hynes follows them from the flying clubs of Harvard, Princeton, and Yale and the grass airfields of Texas and Canada to training grounds in Europe and on to the front, where they learned how to fight a war in the air. And to the bars and clubs of Paris and London, where they unwound and discovered another kind of excitement, another challenge. He shows how East Coast aristocrats like Teddy Roosevelt’s son Quentin and Arizona roughnecks like Frank Luke the Balloon Buster all dreamed of chivalric single combat in the sky, and how they came to know both the beauty of flight and the constant presence of death. By drawing on letters sent home, diaries kept, and memoirs published in the years that followed, Hynes brings to life the emotions, anxieties, and triumphs of the young pilots. They gasp in wonder at the world seen from a plane, struggle to keep their hands from freezing in open­ air cockpits, party with ac­tresses and aristocrats, rest at Voltaire’s castle, and search for their friends’ bodies on the battlefield. Their romantic war becomes more than that–a harsh but often thrilling reality.

Weaving together their testimonies, The Unsubstantial Air is a moving portrait of a generation coming of age under new and extreme circumstances. (description from publisher)

Bad Behavior has blocked 1855 access attempts in the last 7 days.