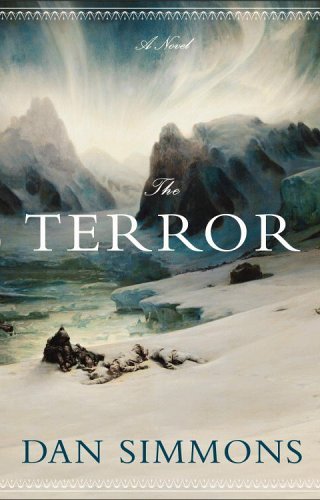 The HMS Terror and HMS Erebus left port in England in 1845, crewed by sailors and explorers fully expecting to find the fabled Northwest Passage. They sailed west, making stops in Greenland and Baffin Bay, until they reached northern Canada. Then, somewhere around Devon Island, all trace of them was lost. The ships vanished into the pack ice; no one has ever known the truth of what became of them. In The Terror, Dan Simmons retells the factual voyage and surmises the terrifying last leg of the journey. The explorers had an experienced commander, two strong ships, the hopes of their countrymen on their shoulders, and fabulously promising food stores made possible by the recent invention of canning.

But everything went wrong almost immediately. Captain Franklin meets a grisly end early on. The ships quickly become useless when pack ice surrounds them and threatens to crush them into splinters. The grip of scurvy, starvation, and madness sink into almost all the crew. As if these natural terrors weren’t enough, a faceless, hungry, menacing terror is stalking them as they flee south across the ice.

This is a beefy book but definitely worth the effort. Simmons does a fantastic job of weaving truth with fiction; he makes the historical facts of the trip exciting and the conjecture completely compelling and believable. The science fiction-y elements of this book are subtle and scary, but the real terror comes from the natural world: an Arctic winter so frigid and unforgiving that it makes a Midwestern winter look tropical by comparison! This thrilling book is an excellent choice for anyone who likes adventure or historical fiction.

One thought on “The Terror by Dan Simmons”