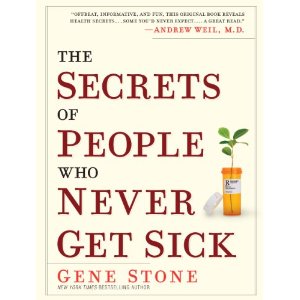 It’s the cold and flu season again – what do you do to combat that “achy, sniffly” feeling? Do you get a flu shot? Swear by chicken soup? Stock up on vitamin C and zinc? Get more ideas in The Secrets of People Who Never Get Sick by Gene Stone which reveals the favorite tricks of people who stay healthy all winter long.

A lot of the “secrets” are pretty common sense – wash your hands, reduce stress, get enough sleep – and some are grounded in tradition – chicken soup, eating garlic, keeping a positive attitude. However, there are a few that are, shall we say, unusual – dunking your head in hydrogen peroxide every morning for instance, or eating dirt. No matter what the secret is, Stone takes a non-judgmental look at it, examining both the scientific and anecdotal evidence for each. And he tries each of these secrets on himself – some have become part of his daily life, some not so much. In the end, Stone asserts that you need to do what’s best for you – what works for one person may not work for another. Your key to success (and good health) lies with two important factors – belief that what you’re doing is working, and consistency. Armed with those facts and some new ideas, you can look forward to your healthiest winter yet!