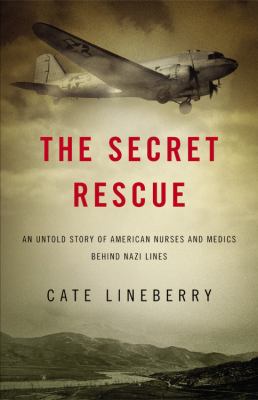 The Secret Rescue by Cate Lineberry is the compelling untold story of a group of stranded U.S. Army nurses and medics fighting to escape Nazi-occupied Europe.

When 26 Army nurses and medics-part of the 807th Medical Air Evacuation Transport Squadron-boarded a cargo plane for transport in November 1943, they never anticipated the crash landing in Nazi-occupied Albania that would lead to their months-long struggle for survival. The group and its flight crew dodged bullets and battled blinding winter storms as they climbed mountains and fought to survive, aided by courageous villagers who risked death at Nazi hands to help them.

A mesmerizing tale of the courage and heroism of ordinary people, The Secret Rescue tells not only a new story of struggle and endurance, but also one of the daring rescue attempts by clandestine American and British organizations amid the tumultuous landscape of the war. (description from publisher)