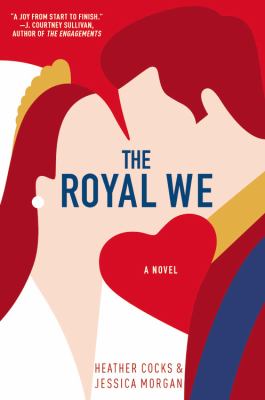 Rebecca, a bit frazzled and jetlagged from her transatlantic flight, arrives in Oxford for a year of study abroad. Struggling with her suitcases, she accepts the help of a handsome young man who shows her to her room. She jokes with him a bit (including some off-color but good-natured remarks about the Royal Family), then collapses on her bed after he leaves, exhausted, only to be startled when her new neighbor crashes into her room, asking if she’d met “him” yet? “Him” is Nicholas, Prince of Wales and future king of England and also, on occasion, helpful porter.

After this somewhat mortifying introduction, Rebecca (known as Bex), settles into having a prince as a classmate and becomes a member of the tight-knit circle surrounding the prince after proving her ability to be descrete. Bex and Nick become friends, bonding over bad television shows and junk food, gradually becoming confidents and finally, in love. A rocky romance begins, ends and then begins again, this time when they are both more mature and clear-eyed. But can the Prince marry his beloved, or will one more obstacle stop them at the alter?

Witty and fast-paced, The Royal We is a tons of fun. I admit I was skeptical at first but early on the heroine mentions that her hometown is Muscatine, Iowa. That peaked my interest, especially since I grew up in Muscatine myself. (No blunders or missteps in describing Muscatine or Iowa, although 95% of the book does take place in England!) The excellent writing kept me reading and the ups and downs of their adventures kept me entertained. Obiviously loosely based on the lives of Prince William and Princess Kate, it’s interesting to get a (supposed) peek behind the walls of The Firm (as the Royals call their institution). Conversations and actions of the circle of royal friends are made-up of course, but feel realistic and plausible. More interesting is the push and pull of Bex and Nick’s relationship – the conflict between duty and love, of doing what is expected of you vs what you want to do. What seems like a unique and special relationship in fact must struggle through many of the same issues that ordinary people must work through.

Recommended for a quick, fun read that is at turns funny and touching.

Bad Behavior has blocked 1518 access attempts in the last 7 days.