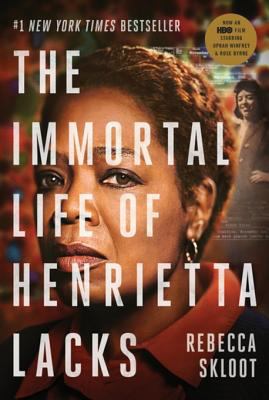 HBO premiered their film adaptation of the bestselling book, The Immortal Life of Henrietta Lacks. The film stars Renee Elise Goldberry as Henrietta Lacks, Oprah Winfrey as her daughter, Deborah Lacks and Rose Byrne as the author, Rebecca Skloot. The bestselling nonfiction book was published in February 2010. The hardcover edition was on the New York Times best seller list for 40 weeks when the paperback edition was released. The paperback edition was on the best seller list for 75 weeks. Libraries could not keep it on the shelf! So it comes to no surprise that HBO made a film about it.

If you have not read this book yet, I strongly encourage you to do so.  You don’t like nonfiction books? Well then you are in luck. The Immortal Life of Henrietta Lacks does not read like the typical nonfiction. This book is part biography, part medical science and a whole lot of drama!

Henrietta Lacks was an African American woman living in Baltimore, Maryland in 1950. She had cervical cancer and was a patient at John Hopkins University. Her cells were taken and cultured without her knowledge and consent.  Her cells grew rapidly but Henrietta died in 1951. To this day, scientists use the cells taken from Henrietta Lacks for medical research. The cells are known around the world as HeLa cells. Rebecca Skloot, the author of the book, was curious about the woman behind the famous cells. She contacted the family about telling her story. Understandably, the family was hesitant to talk about her. The book and the HBO film cover Rebecca Skloot’s and Deborah’s interactions as they try to discover the story of Henrietta and what John Hopkins University Hospital did to her.