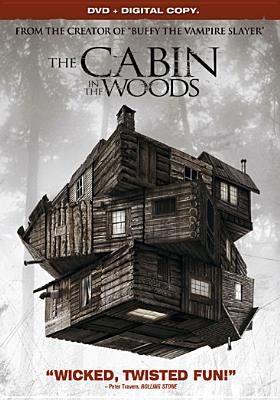 I can’t believe I’m about to recommend a horror movie. This feels weird. But The Cabin in the Woods is the kind of movie that creates a lot of confusing emotions, and I bet that’s the kind of praise that producer and co-writer Joss Whedon would hope for. Five college kids enjoy a road trip to an isolated mountaintop cabin, complete with a peaceful lake, sinister locals, and a cellar full to bursting with creepy memorabilia. If it sounds too much like a stereotypical slasher, that’s because it is: this cabin is being controlled remotely by a full staff of suited, vaguely government-looking people who are manipulating the kids’ behavior the way the Gamemakers manipulated The Hunger Games (Push the red button for more fire, pull the green handle to unleash monsters, that kind of thing).

This film was shot in 2009 – well before the success of Thor and The Avengers made Chris Hemsworth bigger than his small but hilarious role as the not-so-stereotypical jock – but it wasn’t released until 2012. If you’ve remained unspoiled since then, somehow, I won’t ruin your fun in watching this movie unspoiled. But I will say: it’s darned surprising. Every time you think you have this film figured out, you find out it goes just a little bit further, and gets a little bit better, than you’d imagined. But this recommendation comes with a warning: The Cabin in the Woods is funny, and smart, and satirical, and downright fun, but the fun of lampooning horror movies can’t be had without actually showing a horror movie, so there are lots of seriously graphic scenes here – definitely stay away if you can’t handle on-screen violence. But if you can, and if you’ve ever wondered: “why?! Why on earth do people like these dumb slasher flicks? What are we, as a society, and as an artistic culture, getting out of it?!” here’s a well-made movie that will offer some interesting answers.

Bad Behavior has blocked 1701 access attempts in the last 7 days.