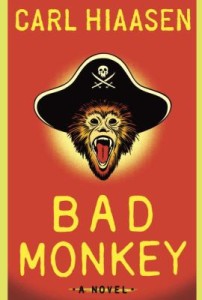 I have an embarrassing admission…

I’ve never read anything by Carl Hiaasen before.  I’ve never read Hoot or Skinny Dip or Native Tongue.  And I honestly didn’t know what I was getting myself into when I picked up his newest novel, Bad Monkey.  With reviewers calling the novel a “misadventure” and described Hiaasen as a “premier humorist”,  my expectations were high.  I was not disappointed.

Bad Monkey introduces Andrew Yancy, a former Miami Police detective and soon to be former Monroe County sheriff’s officer, who now spends his days counting the cockroaches in local restaurants as a restaurant inspector.  Wanting to leave behind his “roach patrol” duties, Yancy believes he may have found his way back onto the force when a tourist fisherman pulls in a human arm and the scandal adverse county sheriff declares the arm’s loss an accident.  Yancy believes that there is more going on than meets the eye, so he begins his own investigation.

There is a lot going on in this book, but it never feels weighted down or overly ambitious.  The stories weave together in a way that feels natural, and Yancy is perfectly imperfect in the way of all the best anti-heroes.   Employing a dark sense of humor, Bad Monkey is moralistic without ever coming off as preachy and weird without forgetting reality.  Revenge fantasy at it’s best, Bad Monkey, is a seriously fun read.  I feel kind of lucky that I have such a backlog of Hiaasen books to read until his next book is released.