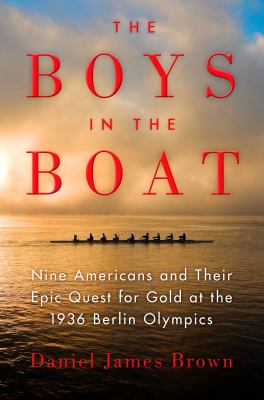 It’s hard to imagine now, in the relative comfort of our modern age, the devastation and poverty brought about by the Great Depression. The combination of a crashing economy and violent weather destroyed lives and businesses. People lost their livelihoods, their homes, their families – it was not unusual for parents to abandon or leave one or more children to other family members or orphanages. To live through this time would inevitably shape and influence a person for the rest of their lives. The Boys in the Boat brings this era and the people who lived it vividly to life.

The Boys in the Boat focuses primarily on Joe Rantz, one of the boys who will become part of the team that goes to the Olympics. Dirt poor, abandoned by his family when he was a teen, he was representative of the make-up of this group of rowers. Scrapping for everything they had, they were unafraid of hard work and impossible challenges. Being part of the rowing team allowed Joe to attend the University of Washington but it also gave him a family – teammates, coaches, supporters – of like-minded, honest people and it opened up the world to him.

The rowing team comes together and coalesces over the four years leading up to the Olympics. They raise the previously dismissed Washington rowing team to a contender, beating their rivals at the University of California Berkeley and then the East Coast giants of the Ivy League to earn the right to represent the United States at the Olympics. Most of these boys had never been out of the state of Washington – some not outside of Seattle – before they began going to rowing competitions with the team and now they were headed to Europe. It was almost unimaginable.

When I read this book I was surprised by how much of a page turner it was – I couldn’t wait to see what happened next. The gritty details of living through the Great Depression made the story come alive and the story of the Berlin Olympics – so carefully planned (and rigged) by Hitler and the Nazis was eyeopening, an early warning sign (if it hadn’t been carefully hidden by the Nazis) of the horror to come.

Filled with amazing stories both humorous and heartbreaking, peopled with vivid, unforgettable characters and set against the backdrop of great historical events all seen through the lens of the sublimely beautiful sport of rowing, The Boys in the Boat is a must read. Highly recommended.

Bad Behavior has blocked 1521 access attempts in the last 7 days.