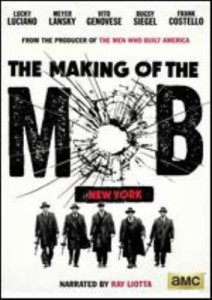 In The Making of the Mob: New York, AMC has created an eight-part docu-drama series that begins in 1905 and traces the rise of the American Mafia for over fifty years. This series examines the lives of Charles “Lucky” Luciano, Meyer Lansky, Benjamin “Bugsy” Siegel, Frank Costello, Vito Genovese, and several other notorious gangsters as they all struggle for power when the mafia starts becoming more organized. The amount of attention to detail that went into the establishment of the five major heads of the family, also known as the Commission, and Murder, Inc., the group of Jewish hitmen who killed around 1,000 people in ten years, shows that the new mobsters rising up in the ranks were definitely looking to run the mafia as more of a business with set consequences and an elected representative board.

This docu-drama looks into the five main families of the American Mafia and goes into great detail showing how organized crime came to exist and flourish in America. What I found to be the most intriguing part of this series was that it included interviews from former politicians, mobsters, actors, and other influential people, as well as actual archival footage  and sound recordings of the actual mobsters alongside the actors’ dramatic interpretations of what was happening. The inclusion of actual footage and interviews really drew me into this docu-drama and had me fully invested in the lives of the mobsters, the shady deals they were doing, and the specific individuals and governmental organizations who were working to bring down the American mafia.

Bad Behavior has blocked 1632 access attempts in the last 7 days.