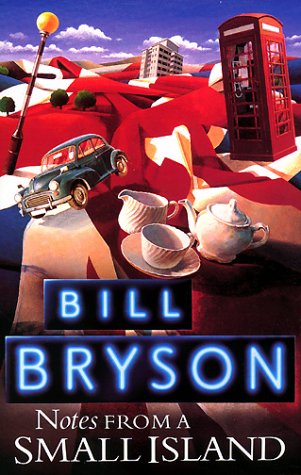 Travel writers range from morose (Paul Theroux) to the absurdist. Summer seems more appropriate for the latter, so for the unfortunate few out there who haven’t experienced a Bill Bryson book, please do so now.

There’s absolutely no excuse for those of us who live in Iowa, as Bryson is one of our own. He grew up in Des Moines, traveled in Europe in the ’70’s as a young man, and has alternated living in England and the U.S. ever since.

My all time favorite is Notes from a Small Island, in which Bryson affectionately pokes fun at the English in all their eccentricity. He clearly admires the British character – their humility and forbearance, but can  endlessly mock their customs and  language (place names such as Farleigh Wallop and Shellow Bowells and incomprehensible Scots accents). Those of us who’ve never quite grown up find this hilarious.

The blurb on the British version warns, “Not a book that should be read in public, for fear of emitting loud snorts.”

3 thoughts on “The Armchair Traveler – Do Travel Writers Have a Sense of Humor?”

Bad Behavior has blocked 1389 access attempts in the last 7 days.