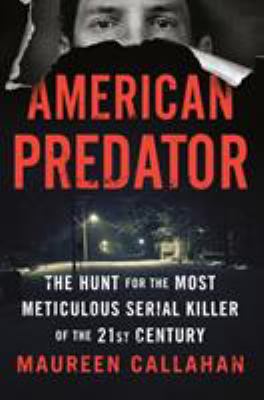 American Predator by Maureen Callahan has been chosen for the Best Sellers Club October True Crime pick! Librarian Anna has this to say about her latest selection:

Published in July 2019, this bestselling book investigates the heinous crimes of serial killer Israel Keyes. While not as infamous as other serial killers, such as John Wayne Gacy or Ted Bundy, Keyes is described as being one of the most “ambitious and terrifying serial killers in modern history.” Living in Alaska as a construction worker and as a father to his only daughter, Keyes would travel across the country to bury “kill kits,” which contained cash, weapons, and tools used to dispose of bodies; he planted these supplies in preparation for whenever he had an urge to act upon his sadistic desires in a particular place. He is thought to have murdered at least eleven people before his arrest in 2012, but stayed under the radar for fifteen years, as the first crime he committed was in 1997. I primarily selected this title for the BSC due to the positive and starred reviews it received from acclaimed journals and reader communities upon publication, as well as due to my surprise of never hearing of Keyes before finding this book, despite him committing these crimes in relatively recent history. I am excited to share this selection with you and hope you enjoy this pick!

Want to know more about American Predator ? Check out the following description provided by the publisher:

A gripping tour de force of investigative journalism that takes us deep into the investigation behind one of the most frightening and enigmatic serial killers in modern American history, and into the ranks of a singular American police force: the Anchorage PD Most of us have never heard of Israel Keyes. But he is one of the most ambitious, meticulous serial killers of modern time. The FBI considered his behavior unprecedented. Described by a prosecutor as “a force of pure evil,” he was a predator who struck all over the United States. He buried “kill kits”–Cash, weapons, and body-disposal tools–in remote locations across the country and over the course of fourteen years, would fly to a city, rent a car, and drive thousands of miles in order to use his kits. He would break into a stranger’s house, abduct his victims in broad daylight, and kill and dispose of them in mere hours. And then he would return home, resuming life as a quiet, reliable construction worker devoted to his only daughter. When journalist Maureen Callahan first heard about Israel Keyes in 2012, she was captivated by how a killer of this magnitude could go undetected by law enforcement for over a decade. And so began a project that consumed her for the next several years–uncovering the true story behind how the FBI ultimately caught Israel Keyes, and trying to understand what it means for a killer like Keyes to exist. A killer who left a path of monstrous, randomly committed crimes in his wake–many of which remain unsolved to this day. American Predator is the ambitious culmination of years of on-the-ground interviews with key figures in law enforcement and in Keyes’s life, and research uncovered from classified FBI files. Callahan takes us on a journey into the chilling, nightmarish mind of a relentless killer, and the limitations of traditional law enforcement, in one of America’s most isolated environments–Alaska–when faced with a killer who defies all expectation and categorization.

Join our Best Sellers Club  and automatically have selected titles put on hold for you. Want the hottest new release from your favorite author? Want to stay current with a celebrity book club? Love nonfiction? We’ve got that too! Choose any author, celebrity pick, and/or nonfiction pick and have us put the latest title on hold for you automatically. Select as many as you want!