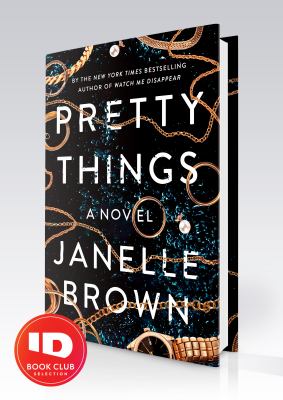 Pretty Things by Janelle Brown was one of the ID Book club’s selections and my introduction to the club. This mystery novel weave together the stories of two very different women. Although they grew up in wildly different circumstances, their life decisions lead back to a handful of similar life-forming moments that they both shared.

All Nina ever hoped for was a decent childhood and to live a life that was different than her mom’s. Nina’s mother is a con artist who hustled throughout Nina’s entire childhood in order to hopefully give her daughter a better life. Moving constantly and trying to make new friends was hard for Nina until Nina and her mom ended up in Lake Tahoe. That year living in Lake Tahoe changed Nina’s life forever, introducing her to her closest friend and first love. That year of tranquility came crashing down around them and ended with Nina and her mom running from the town in a cloud of shame. Nina worked hard and went to college, graduating with a liberal arts degree that she hoped would lead her to a legitimate career. When she gets a call saying that her mom is sick and needs her help, Nina leaves everything behind and rushes home to help her. She ends up putting her life on the line and starts pulling scams with her Irish boyfriend, Lachlan. Nina promised herself she wouldn’t turn into her mom, but what did she expect: she learned from the best and to deny the tricks she grew up learning from her mother doesn’t make sense anymore.

Vanessa is privileged. A young heiress who has had anything and everything in life handed to her, Vanessa wants to leave her mark in the world. She wants to do better than her parents. When her plans don’t turn out quite like she hoped, Vanessa becomes an Instagram influencer. Traveling around the globe, posing for pictures in exotic locations, and being showered in free clothes and products as long as she posts pictures of herself using them has become Vanessa’s life. Being an Instagram influencer quickly overtakes and becomes her entire life. Based on her Instagram, it looks like Vanessa leads a perfect and immensely covetable life. She shouldn’t be wanting for anything. Behind that facade however, Vanessa’s life is full of tragedy. The catalyst proves to be a broken engagement, which sends Vanessa, in desperate search of solitude, to her family’s estate, Stonehaven. This sprawling mansion on Lake Tahoe is full of dark secrets that haunt Vanessa and her family.

Lake Tahoe and Stonehaven sing a siren call to Vanessa and Nina, luring both women back to the site where their lives intertwine even tighter, leading to a twisting confrontation full of revenge, deceit, duplicity, and destruction. 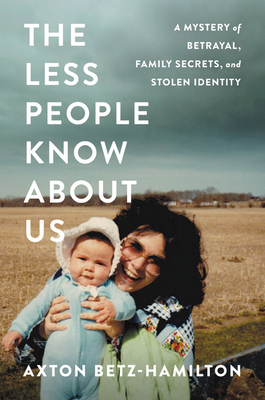 I don’t know about you, but the amount of reading I have done recently has drastically decreased. I have been gravitating toward podcasts instead. Another librarian recommended The Less People Know About Us  by Axton Betz-Hamilton as a true crime memoir that I would like and she was right! This book may be nonfiction, but it reads like fiction: a riveting tale of family drama and one person’s journey to rebuild their life from bare bones.

The Less People Know About Us  by Axton Betz-Hamilton follows Axton from childhood to adulthood. Growing up in small-town Indiana in the early 1990s, Axton and her parents (and the occasional grandparent) found themselves struggling. Why? When she was 11, both of Axton’s parents had their identities stolen. Life changed forever for them after this happened: fights over money became more and more frequent and their credit ratings were tanked. Every time Axton mentioned going to the authorities or the banks to help, her mom said she would handle it, when in reality, there was nothing much they could do to help because identity theft was a somewhat new concept.

To hide from the identity thief, they moved to different addresses and changed all of their personal information. Going so far as to avoid answering the door and to try to live as quiet a life as possible, Axton and her parents completely cut off the outside world. Isolated from friends and family, Axton’s life became increasingly more lonely. She became more and more anxious and eventually developed an eating disorder, seemingly quarantined in her childhood home as the identity thief was always able to find them no matter where they moved.

Years later, Axton discovered that she also was a victim of identity theft. Unfortunately by the time she discovered this, she was already thousands of dollars in debt. Her credit was ruined. In order to dig herself out of this, Axton became an award-winning identity theft expert doing research into this topic and trying to figure out why people choose to steal the identities of others. It took her years to figure out who was responsible and that involved trying to untangle a massively intricate web of lies that formed before she was even born. 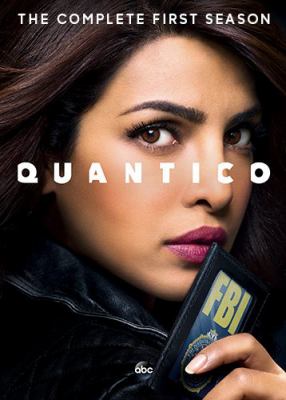 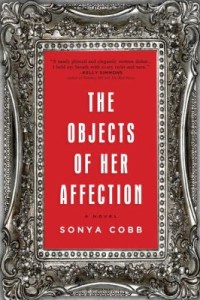 How far would you be willing to go to keep your family together? To get your dream house? To provide a life for your children that you never had? Would you hunt for your dream job? Would you steal? Would you jeopardize your own future to make sure your children have whatever they want? All of these are questions that Sophie Potter has to deal with in Sonya Cobb’s new novel, The Objects of Her Affection.

In The Objects of Her Affection, Sophie finds herself home alone with two young children, wanting to give them the house and the childhood that she never had growing up. She bounced from apartment to apartment as a child, moving when her mother found new work. After her father figure died, her mother skipped town, leaving Sophie to fend for herself.

With her husband ensconced and buried within his work as a museum curator at the Philadelphia Museum of Art and with her own career at a standstill after the birth of their two children, Sophie finds herself floundering for support and yet in charge of all the bills and the family’s well-being. After she finds her dream house and convinces her husband of its potential worth, he leaves her in charge of figuring out the whole mortgage and loan business. After signing up for what she believes to be the best offer, Sophie soon realizes that that deal was too good to be true after notices and bills keep showing up at her door, she actually can’t afford the mortgage payment each month, and the business can’t track down who actually owns her loan.

Frustrated, she visits her husband at work to tell him about the mess she’s in and accidentally slips a piece of museum property in her purse. Not wanting to get him into trouble, she decides to sell the piece. Shocked at the amount of money she gets, Sophie sees that she can afford to keep up on all of the bills using that money without having to tell her husband about the mess she has put them in. Sneaking more objects out of her husband’s office gives her a thrill and a sense of satisfaction that she has been missing since the birth of her children, but once the museum realizes pieces are missing and the FBI comes to interview everyone, Sophie is forced to make a choice between telling the truth and keeping her dream afloat by stealing yet another museum piece. The Objects of Her Affection gives readers an up-close look at the lengths people will go through to keep their families together, just how dangerous keeping secrets can be, and how giving up is never an option.

Bad Behavior has blocked 1296 access attempts in the last 7 days.