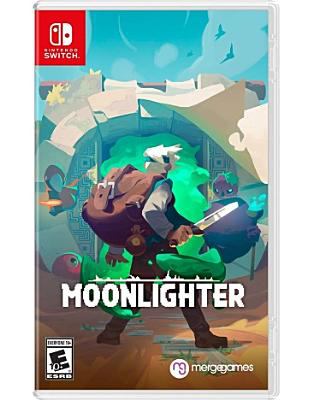 When I first launched Moonlighter, I was immediately struck by its art style. True, an indie game with retro-styled pixel graphics isn’t exactly a rare find these days, but Moonlighter manages to stand out from the crowd with its refreshingly bright and varied palette. Even more impressive are the animations, which are painstakingly detailed and impart a remarkable amount of character to the simplistic sprites. My favorite example is the shop assistant you can hire after expanding your shop enough. They have a distinctive coif of thick hair that they always take a moment to tie back when you open your shop for the day.

But I’m getting ahead of myself. At the beginning of the game, your shop (named, surprisingly enough, the Moonlighter), far from being successful enough to require an assistant, is struggling to stay open. In fact, the whole town of Rynoka is depressed, both economically and emotionally – a far cry from its heyday as a bustling hub for both heroes and merchants. This prosperity stemmed from the nearby Dungeons – four mysterious caverns that appeared out of nowhere one day, attracting adventurers of all sorts seeking fame and fortune within. Of course, there’s neither glory nor riches without risk, and as the death toll mounted, all but the least dangerous of the Dungeons were boarded up. Rynoka’s (and by extension the Moonlighter’s) salad days ended soon after.

Enter Will, the player character. Although a merchant by trade, he moonlights (get it?) as a hero by night, venturing into the sole open Dungeon for loot to sell at the shop by day. This is the conceit by which developers Digital Sun integrate two disparate (but similarly addictive) genres of gameplay – roguelite dungeon crawler and shop simulator – into one brilliant, engaging gameplay loop. The money you make selling your loot in the shop can go to upgrading your shop or resuscitating Rynoka by investing in new businesses. The most important of these businesses is the blacksmith, who takes money and materials and crafts armor and weapons for you. These in turn allow you to delve deeper into more difficult dungeons, making more money to further expand your shop and upgrade your gear, allowing you to make it even further into the Dungeons, and so on. It’s the type of game that will have you saying “just one more day” over and over until the sun rises – in the real world this time.

Bad Behavior has blocked 2278 access attempts in the last 7 days.