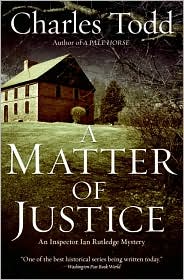 This is the 11th in the Inspector Ian Rutledge Mystery series, but the first one I’ve read.  As a historical mystery, it makes for an interesting genre, but what I found even more intriguing was that the author, Charles Todd, is a pseudonym for a mother-son team who don’t even live in the same state!  Even in this high-tech world, I still marvel at that kind of skill, but for now, let’s focus on the story.

A Matter of Justice takes place in 1920’s England, and the main character, Rutledge, is an inspector for Scotland Yard.  He is called to the rural village of Somerset to investigate the brutal murder of a successful London financier, Harold Quarles.  There are no shortages of suspects, as many of the villagers openly admit to totally despising the man.  Even Quarles’ wife and the town’s police officer are under suspicion.

In what turns out to be a very effective technique, the reader is clued in to the real killer early on, and as the pages kept turning, I began to fear that Rutledge would arrest the wrong person or never literally bring the “matter to justice.”  Another useful ploy was the voice of Hamish in Rutledge’s head.  Hamish,  a soldier who died under Rutledge’s command in the trenches of WWI,  serves as a sort of guilty conscience for the inspector. This contributes greatly to making him a fully human character and not just some singular sleuth.  Though some will find this similar to an Agatha Christie mystery, I found it refreshingly superior.

Bad Behavior has blocked 1209 access attempts in the last 7 days.