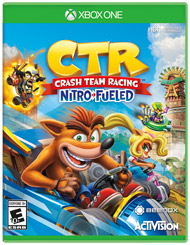 In Crash Team Racing: Nitro Fueled, the player plays as a character from the world of Crash Bandicoot. Whether that be a giant tiger named Tiny, or an mad scientist with a rocket lodged into his head named Dr. N. Gin, there is a wide variety of cartoon racers to pick from and even more customization when it comes to the kart that the character drives.

This game is a ton of fun for anyone looking for an arcade karting game that isn’t Mario Kart from Nintendo. It looks beautiful, this remake really shows how far graphics have come in the 20 years since the release of the original Crash Team Racing.

Crash Team Racing: Nitro Fueled includes the Adventure single player mode from the original game, an online multiplayer mode as well as split screen support so you can bring a whole bunch of friends into your living room and race against each other there.

There is a ton to do in this arcade kart racer and even more fun if you have friends to tag along and do it with you. I highly recommend this game to fans of the original or fans of kart racing games in general. Even though it is a remake, it also serves as a reminder of why this game got a remake in the first place. This game holds up even after 20 years.

Bad Behavior has blocked 1539 access attempts in the last 7 days.