Concussion, starring Will Smith, is based on the true story of American immigrant Dr. Bennet Omalu, a forensic neuropathologist, who is known for looking deeply into the autopsies he performs to learn more about why people died. Dr. Omalu wades through this dramatic thriller by making waves in the scientific community by discovering a brain injury that has the power to topple the NFL.

Running side-by-side with Omalu’s story is the story of several different NFL players experiencing trouble after their careers have ended. They display erratic behavior, aren’t themselves, and the people that they turn to for help seemingly have no idea what to do. When a pro football player shows up dead and Omalu has to do the autopsy, he discovers trauma that will change the NFL forever.

Dr. Omalu made the first discovery of CTE, chronic traumatic encephalopathy, a progressive degenerative disease found in people who have a history of repetitive brain damage. After paying for tests out of his own pocket for various football players, Omalu discovers that this traumatic brain injury is something that more football players will suffer from and that they should all be made aware of CTE. After publishing a paper with his findings, Omalu begins fighting for the concussion truth to be heard. He finds major pushback from both the NFL and the public with threatening phone calls to his house, visits from the FBI, and other doctors dismissing his findings among just some of the threats. The National Football League works to quiet Omalu’s findings, something that he simply cannot allow. This movie follows Omalu’s journey to make the NFL acknowledge CTE and the incredible uphill battle he faces to make the public believe his findings.

This movie is based on a book Concussion by Jeanne Marie Laskas.

Backup O-line player “Johnny Anonymous” gives us an opportunity to step behind the scenes of the 2014 – 2015 NFL season in NFL Confidential.   He writes in candid detail about the infractions, machinations, and politics of the League.

My personal favorite was how teams habitually pick up older knowledgeable free agents on short notice from their rivals.  They’ll make them ride the pine on the active roster the rest of the season just to poach the entire defensive scheme for that one game.

Enjoy tedious appearances of the F word, which some consider gritty realism.  On the whole, Johnny is a nice guy and this book will give you a great place to focus your attention in this downtime between the Superbowl and the Draft. 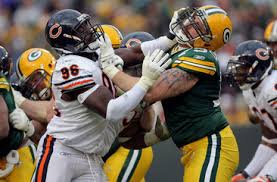 Whether or not you think it’s a big deal, it kind of is. Halas versus Lombardi.
For 180 minutes this weekend, typical genteel Midwestern politeness will be suspended and (gasp!) unpleasantries may be exchanged as the Bears host the Packers for the NFC championship.

The last time these two storied rivals tussled for the big one? One week after Pearl Harbor on a frosty day back in ’41. Chicago won and though they are 3.5pt underdogs heading into Sunday, they’ll find a way to extend that tradition an additional 70 years.

Be sure to stop in to the downtown reference desk during the game and feed Bill scores.

Bad Behavior has blocked 1674 access attempts in the last 7 days.