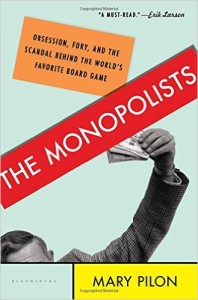 The Monopolists: Obsession, Fury, and the Scandal Behind the World’s Favorite Board Game by Mary Pilon

Monopoly. Everyone is familiar with the board game.  The odd little tokens and the fight over who gets to be the racecar. Plastic green houses and plastic red hotels. The person that always insisted on being the banker. The seemingly endless trips around the board, passing “Go” and collecting $200. The agony of landing on Boardwalk when it had multiple hotels on it.

“In 1934, Charles B. Darrow of Germantown, Pennsylvania, presented a game called MONOPOLY to the executives of Parker Brothers. Mr. Darrow, like many other Americans, was unemployed at the time and often played this game to amuse himself and pass the time. It was the game’s exciting promise of fame and fortune that initially prompted Darrow to produce this game on his own. With help from a friend who was a printer, Darrow sold 5,000 sets of the MONOPOLY game to a Philadelphia department store. As the demand for the game grew, Darrow could not keep up with the orders and arranged for Parker Brothers to take over the game. Since 1935, when Parker Brothers acquired the rights to the game, it has become the leading proprietary game not only in the United States but throughout the Western World”.

This audiobook goes into more detail about the origins of the Monopoly game and how it became the game we all recognize today. People might have always thought the game was created by Charles Darrow if it had not been for a lawsuit in 1973.  Ralph Anspach, an economic professor, created a game that he called, Anti-Monopoly and he was sued by Parker Brothers. The truth of the origins of the Monopoly game were revealed during this time. A fascinating look at America during the turn of the century and through the Great Depression, corporate greed, and the discovery of the truth, this audiobook is one that you don’t want to miss!